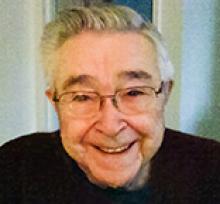 GEORGE ALBERT RESCH On August 3, 2017, George Albert Resch, aged 97, passed peacefully in his sleep at Concordia Hospital, and slipped away to rejoin his loving wife Katherine and his eldest son Keith. He is survived by five of his children: daughter Judi Carroll (Ed) and sons, George (Pamela), Tom, Michael (Kimberley), Rodney (Roxann); 12 grandchildren, Kimberly, Kristy, Chelsea, Erika, Darryl, Craig, Brenda, Danielle, Jon, Marley, Duncan and Sydney; as well as three great-grandchildren, Linkin, Kade and Alba. George was born and grew up in North End Winnipeg, the youngest of a big happy family. While in the army he was stationed in Bermuda, where his renowned piano skills earned him a regular spot in the Officer's Mess. He was employed by Eaton's until retirement in 1983. In 1946 he married Katherine Righetti and they spent 49 happy years together until Katherine passed all too soon in 1995. In 2007 Dad sold the family home and moved into a suite, maintaining his independence throughout his 97 years. He even learned to use the computer, which allowed him to do his banking online, Skype with his family in distant places, and attend virtual mass on Sundays. George had a great wit and sense of humour that remained sharp up till the end. His musicality through both the piano and organ delighted many, and the rollicking sing-alongs he led and his mischievous sense of fun made him the life of any party. All the way to his last days, his children and grandchildren cherished the great conversations and laughs of Happy Hour with Dad/ Grampa. Many thanks to the beautiful caregivers of the third floor northeast ward at Concordia Hospital, for your dignified care of our dear Dad in his final days. Our Papa George was so much to so many, and we will miss him greatly. All are welcome to a celebration of his life on Friday August 11, 2:00 p.m. at Klassen Funeral Home. KLASSEN Funeral Home 1897 Henderson Highway, Winnipeg, MB (204) 338 0331 Condolences may be sent to www.klassenfuneralhome.com