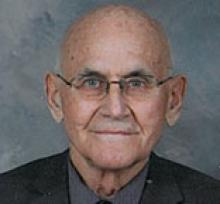 IRVIN KLEPATZ May 12, 1932 - August 4, 2017 It is with great sadness that we announce the death of a father, grandfather and friend, Irvin Klepatz, on August 4, 2017, at St. Boniface Hospital. He was born and grew up on the farm in the Oldenburg District of the R.M. of Whitemouth. He attended Oldenburg School and, besides helping on the farm, he was on the family gravel truck for three summers, then he went to work for the Hudson's Bay Company in the fur trade division, a job that he thoroughly enjoyed, being posted at various locations in Northwestern Ontario. He never lost the love of farming so, in 1960 when his parents decided to retire, he left the Bay, married his long time sweetheart Dorothy, took over the farm and later, with the help of their two sons, farmed for 43 years. In 2003 they sold the farm to a neighbour and retired to East St. Paul to be closer to certain facilities that they might eventually need. He was predeceased by his wife Dorothy, parents Gustav and Erna, brother Earl, sister Myrtle and daughter in law Angela. He leaves to mourn son Ross of Whitemouth, son Brian (Lesley) and grandchildren Emma and Abbi of Calgary; his sister Amyra (Jim) of Granite Falls, Washington; plus numerous nieces, nephews and many friends. The family would like to thank all doctors and staff of 4B, St. Boniface Hospital. Donations in Irvin's memory may be made to a church or a charity of your choice. The memorial service will be held at Abundant Life Lutheran Church, 3486 Raleigh Street, East St. Paul, MB on Wednesday, August 9, 2017, at 10:30 a.m. with Pastor Annemarie MacIntosh officiating. Interment of ashes will be at the Oldenburg Lutheran Cemetery after the luncheon. KLASSEN Funeral Home 1897 Henderson Highway, Winnipeg, MB (204) 338-0331 Condolences may be sent to www.klassenfuneralhome.com