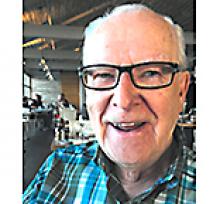 WILLIAM (ROY) FINNEN Peacefully, surrounded by family on August 5, 2017, William "Roy" passed away at the age of 85 years. Roy was born and raised in Killarney, Manitoba and moved to Winnipeg after high school to commence his studies as a chartered accountant. He is survived by his daughters, Alison and Colleen (Erwin Martens) and his loving grandchildren, Liam and Alyssa. He is also survived by his brother Russell of Killarney and sister Fern Bamford of Manitou, Manitoba and his special friend Lilyan Lacey of Sturgeon Creek Assisted Living Facility in Winnipeg. He was predeceased by his first wife Gwen (Lovett) and by his second wife Edith (Brooks). Roy practiced his profession of accounting with great care and devotion both in private practice and in the public sector. Together with his first wife Gwen, he founded the self-help organization The Society for Depression and Manic-Depression in 1983, now known as the Mood Disorders Association of Manitoba. It was due to his own struggles with depression that he invested so much of his time and energy into the development of the organization. Roy was a longtime member of St. Margaret's Anglican Church where he served in various capacities and found great solace and strength from his faith. He enjoyed curling and loved being outdoors, often spending time bird watching. He is remembered for his lively compassion and quick wit, and for always lending a patient ear to his friends and family. As a dedicated father and grandfather, Roy brought his family great joy and his unconditional love and conversation will be deeply missed by all. A memorial service will be held on August 22, 2017 at 1:30 p.m. at St. Margaret's Anglican Church, 160 Ethelbert St., Winnipeg. In lieu of flowers, donations can be made to the Mood Disorders Association of Manitoba at 100-4 Fort St., Winnipeg R3C1C4. The family would like to extend a heartfelt thanks to the members of St. Margaret's, in particular Eric Parsons and Noah Block for their faithful friendship and to June Bates for the support she offered Roy and his family; to the staff at Sturgeon Creek #1, in particular Kathleen Kinal for her outstanding nursing care and friendship, and to his niece Myrna Black for her love and dedication to her Uncle Roy. THOMSON FUNERAL HOME 669 BROADWAY, WINNIPEG, MB R3C OX4 783-7211 Condolences may be sent to www.thomsonfuneralchapel.com