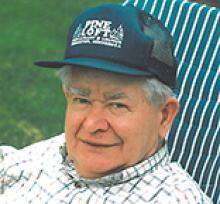 WALDEMAR (WALTER) NADLER April 6, 1933 - August 4, 2017 Born to Sophie and Ludwig Nadler in Lwowek, Poland, Waldemar was the oldest of their three children. Waldemar's father died when he was 7 years old. Sophie and her children immigrated to Canada in 1949 to start a new life with her family, the Rossin's, who had already settled in Dauphin, Manitoba. Waldemar married Maria Fast in 1965 and they were blessed with a son, Stefan, in 1969. Shortly after Stefan's birth, Maria was diagnosed with cancer and died in 1974. It was Maria's final wish that Margaret, her sister, look after Waldemar and her young son. Margaret and Waldemar became very close, and were married in 1976. Together with Stefan, they shared life as a family. They enjoyed many years together, first working and then, in retirement, travelling and visiting. Margaret developed several health issues and died in 2010. Waldemar's own health was not without challenge and complications. In recent years, congestive heart failure caused a domino of emergency and hospital visits, ending in his relocation to the Maples Personal Care Home in early 2017. The family is grateful to the Victoria Hospital and Maples staff for their respectful and gentle care of Waldemar in the last stages of his life. Waldemar was predeceased by his parents, his sister Johanna Person and his two wives. He leaves his son Stefan, his sister Maria Streu and numerous Fast, Person, Rossin and Streu family members. A service to celebrate Waldemar's life will take place on Monday, August 14 at 10:00 a.m. at the Klassen Funeral Home, 1897 Henderson Highway in Winnipeg. In lieu of flowers, donations may be made to Bethel Mennonite Church, 465 Stafford Street, Winnipeg, MB R3M 2E2. KLASSEN FUNERAL HOME 1897 HENDERSON HWY 204-338-0331 Condolences may be sent to www.klassenfuneralhome.com