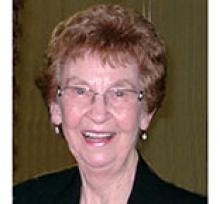 SADIE HELEN PURDY February 22, 1930 - August 10, 2017 The family wishes to announce the passing of Sadie Helen Purdy of Oak River, Manitoba on Thursday, August 10, 2017 at Riverview Health Centre in Winnipeg. Although it is a time of sadness for Sadie's family and friends, it is also a time of great celebration for the life of one whose smiles touched many. Sadie is survived by her son, Scott and wife Nori of Calgary, grandson Mitchell and wife Rachel, great-grandchildren, Vaila, Finlay and Scarlett of Vancouver, grandson Devin of Calgary; daughter Shauna and husband Del Michie of Winnipeg, grandson Spencer of Lethbridge and grandson Deklan of Winnipeg. She is also survived by her brother Roy Adam. Sadie was predeceased by the love of her life, Keith in 1999. They were married for 46 years. Sadie was born February 22, 1930 at Bradwardine, Manitoba to Bertie and Helen Adam, who were originally from Scotland. Sadie took her schooling in Bradwardine for 11 years and then attended teacher's training at Normal School in Winnipeg. She taught Grades 1 to 8 in Basswood, Manitoba for one year. In 1948, she became a telephone operator for Manitoba Telephone System. This was a career she absolutely loved and worked at for the next 48 years. She worked at telephone offices in Oak River, Kenton, Strathclair, Hamiota, Rapid City and Brandon. When Sadie wasn't "flying" down the road to one of the telephone offices, she could usually be found in her kitchen baking something for the community. And oh how she loved to have company at that kitchen table! Among Mom's other favourite things were the cabin at Clear Lake, dancing with Keith and all their friends, entertaining and her grandsons. Above all else, Sadie loved people. A service to celebrate Sadie's life was held on Thursday, August 17, 2017 at 2:00 p.m. at the Oak River United Church, Oak River, Manitoba. Interment followed in the Oak River Cemetery. In lieu of flowers, donations in Sadie's name may be made to CancerCare Manitoba, PO Box 2248 Stn. Main, Winnipeg, MB R3C 9Z9. Messages of condolence can be shared at www.campbellfuneralhome.ca. Campbell Funeral Home, Hamiota were in care of the arrangements.
Publish Date: Aug 26, 2017

SADIE HELEN PURDY Sadie Helen Purdy; formerly of Oak River, MB; beloved wife of the late Keith Purdy; mother of Scott (Nori) Purdy and Shauna (Del) Michie; passed away at Riverview Health Centre Personal Care Home, Winnipeg, MB, on Thursday, August 10, 2017 at 87 years of age. A service to celebrate Sadie's life will be held at the Oak River United Church, Oak River, MB on Thursday, August 17, 2017 at 2:00 p.m. with interment following in the Oak River Cemetery. A time of fellowship and refreshments at the Oak River Community Rink Hall will conclude the afternoon. In lieu of flowers, donations may be made in Sadie's memory to CancerCare Manitoba, PO Box 2248 Stn Main, Winnipeg, MB R3C 9Z9. Messages of condolence can be shared at www.campbellfuneralhome.ca. Campbell Funeral Home, Hamiota are in care of arrangements. (866) 620-2744