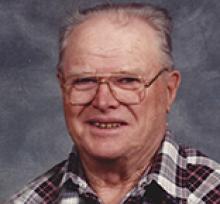 FREDERICK KELL Surrounded by family, Frederick Kell of Deerhorn, MB passed away on August 20, 2017 at the age of 93. Fred was born on October 24, 1923 in Camper, MB. Most of Dad's life was spent in the Deerhorn area, as he took over his parent's family farm in Deerhorn in 1941. On July 30, 1948 he married the love of his life Lilly Frances Humiski. Together they built their family farm which will continue to be operated by their family. Dad loved the farming life and farmed up until his passing. He loved spending his summers in the hayfield with all the boys who worked with him over the years. Dad's pride and joy were his grandkids and he adored each and everyone of them. Dad leaves to mourn his sons Brian, Terry (Linda), Les (Gale), Ross (Leanne) and Reid (Tori); his grandchildren Lonnie, Mandy, Marlee (Ken), Kelsey (Angela), Mikayla and Mark; great-grandchildren David, Samantha, Dane and Theo along with his extra special four legged son, Moose. Also mourning his loss are his sister Kay, many nieces, nephews and many many friends. He was predeceased by his wife Lilly in March 1993 and by his siblings Mary, Molly and Adam. A funeral service will be held at 10:00 a.m. on Friday, September 1, 2017 at the Eriksdale Recreation Centre with Shirley Russell officiating. Interment will be held in the Eriksdale Municipal Cemetery with a luncheon to follow in the hall. Pallbearers will be Darren McDougall, Harvey Murray, Danny Christensen, Ray Miller, Theo Spray and Perry Desjarlais. Honourary Pallbearers will be Danny Huminski, John Strutynski, Billy Huminski, Fred McDougall, Travis McDougall, Bernie Stoneham and Garth Monk. In lieu of flowers, donations can be made in Fred's memory to STARS Head Office, 1441 Aviation Park NE, Box 570 Calgary, Alberta T2E 8M7. The family would like to thank the IERHA Ambulance attendants, E.M. Crowe Hospital doctors, nurses and staff, STARS Ambulance for their quick response, HSC staff, Shirley Russell and John and Karen Gray of Arnason Funeral Home for all their help and support with Dad. Arrangements by: ARNASON FUNERAL HOME Ashern - Lundar 1-204-768-2072 1-866-323-3593
Publish Date: Aug 30, 2017