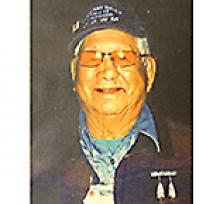 WILSON FREDRICK SCOTT Peacefully, surrounded by family, at home on August 20, 2017, Wilson Scott passed away at the age of 91 years. A wake service is being held at the Hollow Water Community Hall from August 23 to 24, 2017. Funeral service will follow in the hall on Thursday, August 24, 2017 at 1:00 p.m. with final viewing at 12:00 p.m. Cremation to follow after funeral service as per his wishes. Wilson is survived by his children Carolyn (Norman), Leslie, Viola (Chanka) and John (Shirley) Moar Jr., foster children Charles Smith and Vivian Smith; grandchildren Terry, Gilly, Christiane, Helga, Wesley, Kevin, Gary, Randy, Lizzy, Sonya, April, Gregory, and many more grandchildren, great-grandchildren, nieces, nephews and friends. He was predeceased by his wife Mary Louise, son Roland, his parents Lucy and Isaac Scott, stepfather James Black, and all his siblings. Condolences may be sent to the family c/o Spirit Road Funeral Services Inc. PO Box 200, Fort Alexander, MB R0E 0P0, 204-340-6490 or friends may leave a message of sympathy at spiritroadfs@shaw.ca