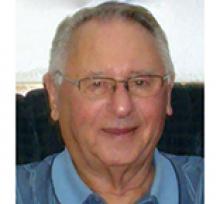 MATT HRABARCHUK Matt, beloved husband of the late Florence, passed away peacefully in the Souris Health Centre on July 20, 2017 at the age of 87 years. Matt was born at Arran, Saskatchewan on November 5, 1929. After graduating from Grade 12, he moved to Brandon in July 1948. Matt worked at Breen Motors from July to October and then obtained employment at the Brandon Hospital for Mental Diseases in November 1948. During his tenure at the hospital he received his certificate in psychiatric nursing and also graduated as a male nurse. In November 1953, he started a new career at the Brandon Post Office which lasted 38 years. Matt married Florence Oertel in Minnedosa, Manitoba in 1963. Florence and Matt left Brandon, Manitoba for Lynn Lake in 1970 to be the Postmaster for what was to be a two year posting. They ended up staying for 12 and one-half years. After that they arrived in Souris in October 1982. He retired in December 1991. They made many long lasting friends in both communities. Following retirement, Florence and Matt spent their winters in south Texas for numerous years, again adding to their collection of good friends. A celebration of Florence and Matt's 50th wedding anniversary took place in 2013 at the Souris and Glenwood Golf Club. Matt is survived by his stepsons: Bob (Jacquie) Eamer-Maricopa, Arizona and Rick (Marilyn) Eamer-Brandon, Manitoba; grandchildren: Krista (Joe) Shalala, Ryan Eamer, Melanie (Clayton) Corbey; great- grandchildren: Carter, Natalyn and Ethan; his sister Ann in Dauphin, Manitoba and several nieces and nephews. Matt was predeceased by his parents John and Nellie Hrabarchuk, two sisters, two brothers, stepson Ron Eamer and by his wife Florence of 52 years. The family would like to thank Dr. David Cram, all the staff at the Souris Health Centre and the many friends and neighbours for their loving support of Matt and Florence. Funeral service to celebrate Matt and Florence's life will be held at Kowalchuk's Funeral Chapel, Souris, Manitoba on Wednesday, September 6, 2017 at 2:00 p.m. Interment in the Souris and Glenwood Cemetery. In memory of Matt, donations may be made to a charity of your choice. Expressions of sympathy may be made at www.kowalchuks.net