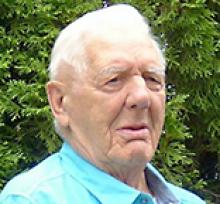 GERARD PELLETIER On Friday, August 18, 2017 Gerard Pelletier passed away at the Brandon Regional Health Centre, Brandon, Manitoba. He was born on February 10, 1929 in Ste. Agathe, the oldest of 13 children born to Felix and Leontine Pelletier. He grew up and went to school in La Broquerie. He spoke only French until he was 14 years old, and continued to converse in French with his brothers and sisters throughout his life. Gerry left school early and put his hand to a number of occupations. He was a certified cheesemaker, and a certified mechanic, attending school in the evenings. He worked in the bush for a time, and was proud of being part of the crew, along with his brothers, who constructed the arena in La Broquerie, Manitoba. Gerry owned his own service station, Jet Esso, in Winnipeg, in the mid-1960s and early 1970s. Along with his brother, Dennis, Gerry established Pelletier Brothers' Trucking, based out of Lorette, Manitoba, a scrap recycling business. In the late 1970s, Gerry's sons joined him in the successor to that company, Pelletier and Sons, and then in 1980, a new company was formed, Karbasher Manitoba Ltd. During the early 1980s Gerry and his sons were involved in mine disposal in northern Manitoba, at places such as Snow Lake, Flin Flon and Thompson... the first ones to attempt the work of dismantling mines. Gerry loved a challenge! In 1985, the family moved to Brandon, where Gerry and his sons established Wesman Salvage, where he worked until his retirement in 1998 at 69 years of age. His heart was always in that business, and it wasn't easy for him to retire. Gerry continued to visit regularly, several times a week, always interested in the new machinery and keeping up with what was going on there. As for his family life, Gerry met Ida Borsboom in Winnipeg and they were married in 1954. Together they raised seven children, John, Patricia, Barbara, Gerry, Rick, Mark and Darlene. Tragically, Ida died accidentally in 1980. In the spring of 1991, Gerry met Olive Geiler at a dance. It was love at first sight and they were married on November 23, 1991. They loved to dance... and most weekend evenings were spent dancing together at the Army and Navy Club. Gerry and his family welcomed Olive's family into their own, and for 10 years, from 1996 to 2005, Thanksgiving was spent at the Clear Lake Lodge for a gigantic potluck family get-together. It was a highlight of the year. Gerry enjoyed playing cribbage with all the grandchildren, and sitting back and watching everyone. Gerry enjoyed his retirement years, even though it took him a while to actually be retired. He took up golf at age 70, and while living at Monterey Estates, he would walk over to Northern Pines for a round, well, maybe three rounds a day, with his buddies. He also took a bit of an interest in cooking... something for him to do... Bacon and eggs and soups made out of broth from turkey carcasses were his specialties. Gerry and Ollie enjoyed road trips through the States in the winter and in 1993 they travelled to Australia and New Zealand. He was predeceased by his parents, Felix and Leontine; his wife of 26 years, Ida; his sisters Aurore Boulet and Helene Leger; brother Roland; brothers-in-law Victor Champagne and Leo Rocan; grandson Christopher; stepdaughter Leanne Campbell, and stepson-in-law John Olson. Gerry is remembered in love by his wife of 26 years, Olive; his children and their spouses: John and Joanne Pelletier, Patricia Pelletier, Barbara Pelletier and Patrick Bertholet, Gerry and Janine Pelletier, Rick and Kim Pelletier, Mark and Lorraine Pelletier and Darlene Pelletier; his 16 grandchildren and 12 great-grandchildren; his sisters and brothers and their spouses: Josee Champagne, Ida Rocan, Adelard and Yvonne Pelletier, Peter and Joan Pelletier, Irene and Donat Alarie, Paul and Linda Pelletier, Denise and Guy Manaigre, Denis and Pat Pelletier, Yolande Pelletier, Marcellin Boulet and Paul Leger; on Olive's side of the family, his stepchildren: Wally and Deborah Geiler, Bev and Steve Romanik and Phyllis Olson; 10 grandchildren and six great-grandchildren. He was a kind, understanding man... a good man, who didn't complain, even when his health issues made his life difficult. He didn't talk a great deal, but he was the best teacher anyone could ever have. He was a problem solver who often dreamt up the solution to a work challenge overnight and the next morning he would build it. He was admired and well respected by his children and those who knew him. He had a strong work ethic. He loved a challenge and was not afraid to try anything. He was honest... and fair... a hardworking businessman, who loved his family deeply. Gerry will be greatly missed by all his family and friends. The ceremony to celebrate Gerard's life was held at Central United Church, Brandon, on Thursday, August 24, 2017 with Lydia Glawson officiating. He was laid to rest in a private ceremony at Rosewood Memorial Gardens. Donations in memory of Gerry may be made to Multiple Sclerosis Society, Unit 5B, 457 - 9th Street, Brandon, Manitoba R7A 4A9. Expressions of sympathy may be made at www.memorieschapel.com Arrangements with Memories Chapel, Brandon, 1-855-727-0330.