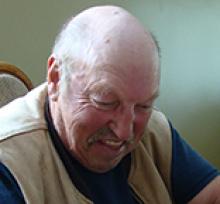 DENNIS LESTER ALBERT SCHESKE It is with great sadness that the family announces the sudden passing of Dennis Scheske, aged 73 years, of Ashern, Manitoba, at his residence, on August 31, 2017. Dennis was born on June 17, 1944 to Henrietta and Falden Scheske. During his lifetime Dennis had many jobs. He worked on several farms, worked for his father in his grocery store and with his brother-in-law once his father retired, and worked for the Town of Ashern as an attendant at the waste disposal site. Once he retired, he kept active mowing lawns in the summer and shovelling snow in the winter. When he gave up his driver's licence and vehicle, he could be seen riding his bicycle up and down the highways keeping them clean. Dennis was very crafty, knitting socks, scarves and mittens, and cross-stitch on plastic canvas, which he sold and gave as gifts to family. There are many people in possession of and wearing his creations near and as far away as Lumsden, Saskatchewan. He is predeceased by his parents, Henrietta and Falden Scheske, in 1998. He leaves to mourn his sisters, Viola (Gerald) and Doreen (Edward); niece Heather (Chris); nephews, Matthew (Janice), Carl (Nicole) and David (Ashley); great-nieces, Makenzie, Marek and Aria; one great-nephew Max; many aunts and uncles, cousins and Ashern friends he made over the years, especially Chuck and Laverne Gosselin, who looked out for him. In keeping with Dennis' wishes, cremation has taken place. A memorial service will be held at 1:30 p.m. on Saturday, September 9, 2017 in the Grace Lutheran Church, in Ashern, MB, with Pastor Gerald Borkowsky officiating. Interment will follow in the Grace Lutheran Cemetery with a luncheon to follow in the Ashern Legion Hall. In lieu of flowers, donations may be made in Dennis' memory to Canadian Lutheran World Relief, 600 - 177 Lombard Avenue, Winnipeg MB R3B 0W5 or to the Heart and Stroke Foundation, Suite 200, 6 Donald St., Winnipeg, MB R3L 0K6. Arrangements by: ARNASON FUNERAL HOME Ashern Lundar 1-204-768-2072 1-866-323-3593