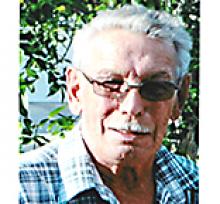 HAROLD EDWARD LUTZ Suddenly on September 5, 2017, Harold Edward Lutz, aged 76 years, of Ashern, MB, passed away at the E. M. Crowe Memorial Hospital in Eriksdale, MB. Harold was born on June 4, 1941 in Winnipeg, MB. He was raised on the family farm in the Ashern area and lived there most of his life until his retirement in 2005. He is survived by the love of his life, Irma Paterson. He will be deeply missed by his children, Darren (Liz), Vinnie, Kim (Darrell) and the mother of his children, Marliene. Harold will also be sadly missed by his sister-in-law Sharon, niece Pam (Carl), nephew Brad (Kim), uncles, aunts, cousins, nieces, nephews and many many friends. He is predeceased by his father Roy in 1987, mother Emma in 1990 and brother Elmer in 2012. Family was everything to Harold. His pride and joy were his grandchildren. He would look forward to every visit with Coleman (Ellen), Haldon, Devan and Carter (Breanna). Harold's passion in younger years was driving truck in Winnipeg and Ashern. He loved his time playing ball with the Ashern Wildcats. In later years, he coached his children's hockey and baseball teams. Harold drove school bus for several years and enjoyed his time spent with the kids on the bus. The feelings were mutual, as many of the kids visited him after his retirement. He spent many years involved in the Ashern Horse Club and was a member of the Ashern Elks Lodge. He was an avid curling and football fan and liked nothing better than a good party with family and friends. Harold looked forward to spending time with his kids and grandchildren. His time spent with Irma was special. She was his sweetheart and his caregiver. Irma gave him a new lease on life and our family is very thankful for this. Cremation has taken place and a graveside service will be held at 12:00 p.m. on Sunday, September 10, 2017 in the Colclough Cemetery. A luncheon and celebration honouring Harold's life will follow at 2:00 p.m. in the Ashern Centennial Hall. In lieu of flowers, donations may be made in Harold's memory to the Lakeshore Hospital Guild, in care of Julie Bergner, P.O. Box 721, Ashern, MB R0C 0E0. Arrangements by: ARNASON FUNERAL HOME Ashern Lundar 1-204-768-2072 1-866-323-3593