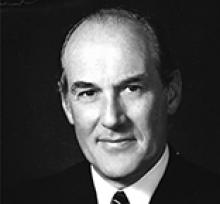 FREDERICK WILLIAM (WICK) SELLERS September 30, 1930 - September 3, 2017 As a result of complications from a second hip fracture and Parkinson's Disease, Wick died peacefully leaving his beloved wife, Margie, children and grandchildren to continue his legacy. Son of Arthur and Isabel Sellers, Wick was born and grew up in Winnipeg attending Queenston, Robert H. Smith and Ravenscourt Schools. At Ravenscourt he graduated as Head Boy and was the winner of the Bawlf Medal which is given to the student who goes the extra mile in helping those around him. He remained deeply connected to the Ravenscourt community by serving as a member and Chair of the St. John's- Ravenscourt School Board through a time of transition which saw the introduction of girls, an endowed scholarship and bursary programme and the first staff pension and benefits plan. The school honoured him with an outstanding service award in 1985 and awards two scholarships in his name. University years saw a brief stint at the University of Manitoba, followed by attendance and graduation from McMaster University in 1952. There he met Margie and they were married in 1954, settling in Winnipeg. He often described marrying Margie as the best decision he ever made. Having spent his first working years on the oilrigs, Wick moved to Great West Life and became a Chartered Life Underwriter. In the mid 1960s, Wick became involved with Spiroll Corporation, an innovative manufacturing company, where he used his considerable sales skills to build a company that had machinery in 42 countries. He chaired the Manitoba Export Commission and was involved in many committees both domestic and international promoting small business and fair trade. Wick was appointed to the board of the Canada Development Corporation when it was formed in 1971, subsequently became chair of the audit committee and was elected Board Chair in 1981. This, along with his other business commitments, meant considerable travel and many days away but Wick made it a priority to be home on the weekends, attend school plays, hockey games and choir concerts and took many red-eye flights to accomplish this. The sailing of the Quad T was a welcome relief from airport lounges and hotel rooms. The quiet of the Lake of the Woods, the family time and the many quiet moments with Margie over a drink by the barbeque strengthened him to meet the challenges of the week to come. In the early 1980s, Wick became involved with the affairs of Dome Petroleum, ultimately chairing the executive committee. For a former roughneck to travel the halls of the executive suite was a unique accomplishment and one that gave him a better understanding of the work that front line employees did in making the company grow and prosper. This became a valuable lesson when owning and managing Alphair Corporation until his retirement in 2002. It was then that Wick and Margie decided to build their dream home on a 52-acre property in the Northumberland Hills in Ontario. High Ridge was a working property and there were many negotiations and details to be managed. The garage became a workshop and Wick spent many happy hours puttering with tools and crafting lamps, end tables and headboards for the family. He had several projects on the go when advancing macular degeneration made it difficult to continue the level of artisanship to which he aspired in making furniture. Never one to shy away from a challenge, he and Margie decided to build a house in town that would meet the needs of their last years and the move to Cobourg was made in August 2011. During the course of his business career, Wick travelled to many corners of the world but the place he called home was always the place that Margie was and where he most wanted to be. He was determined to remain independent and at home and managed to achieve this after the first hip fracture because of the support provided through the CCAC and St. Elizabeth. The family would like to thank them, Dr. Carson Kwok and the caring professionals at the Northumberland Hills Hospital for their care and compassion at home and during his many stays at NHH over the past two years. Margie and their children, Jane (Stephen), Edward (Linda), Ann (Brian), Clare (Colin) and grandchildren, Katie, Maggie, Duncan, Isla, Richard, Caroline and Kate will miss him deeply. His surviving brother Harold and a host of friends will remember Wick as a true gentleman and someone that could be relied on to provide thoughtful counsel, ask pointed questions and who never lost sight of what really matters in life. Cremation has taken place. A service for family and friends will be held 1:00 p.m. Monday, September 18, 2017 at St. Peter's Anglican Church, 240 College Street, Cobourg. No flowers by request and in accordance with his wishes, the family would prefer that any donations be made to a charity that makes a meaningful difference in the community and that you spend time with the people you love at a barbeque or family meal. Arrangements entrusted to D. E. Allison Funeral Home, 103 Mill Street North, Port Hope. Condolences can be sent to the family via the funeral home at www.allisonfuneralhome.com