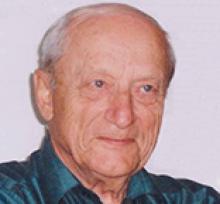 WILLIAM HUGO RENTZ November 20, 1926 - September 11, 2017 It is with great sadness the family announces William's passing on Monday, September 11, 2017 at 90 years of age. He is now in Heaven with his Lord and Saviour and family who he truly missed. Left mourn William's passing are his children, Karen, Lyndon, Bryon (Julie) and Ian (Michelle) along with his grandchildren, Jodi, Joel, Jerrold, Tara, Afton, Abby, Landon and Rylee. He also leaves behind his sister, Agnes Harsch and numerous relatives. He was predeceased by his wife, Gladys in 2003; his parents in 1963, brothers, Eugene in 1929, Eric in 1936, Waldie in 1971, Rueben 2005 and sister Lydia in 2009. William was born in Horschik, Ukraine. The family came to Canada in 1928 and settled in Morris, Manitoba. In 1944, he began in teacher training and taught throughout Manitoba. In January 1957, he embarked on a new journey to become the principal at the Soppo Teacher Training College in Soppo, Cameroons, Africa. In 1964, due to Karen's ill health, he resigned as missionary and the family started their journey back to Canada. On the trip home, they toured the Holy Lands. After arriving back in Canada, William began teaching chemistry at Grant Park High School. In 1986, he retired from teaching and he and Gladys moved to Edmonton. They enjoyed their retirement, socializing with good friends, travelling, fishing, garage sales, etc. until 2003 when Gladys passed away. After this, he travelled with his family to Germany, China, Europe, Hawaii, Florida and a Caribbean cruise. In December 2016, he moved back to Winnipeg. William's funeral service will be held in Edmonton, Alberta. The family would like to thank the staff at Pembina Place Personal Care Home for all the care he received. Wojcik's Funeral Chapels & Crematoriums, Winnipeg, 2157 Portage Avenue, 204.897.4665 www.wojciksfuneralchapel.com