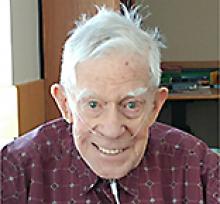 DONALD LYLE DRUCE January 19, 1932 - September 12, 2017 Peacefully on Tuesday, September 12, 2017 at the age of 85, Don passed away at Kildonan Personal Care Home. He was predeceased by his wife of 43 years Bernice (nee Collins), his mother Harriet, and his uncles Cecil and Earl. He is survived by his son James (Jim) his wife Karla and their chosen children (Diamond, Roger, and Linden). He is also survived by his sister-in-law Marjorie (Charles) Grierson, niece Maureen (Richard) Jones, Peter (Julie) Grierson and their families as well as many friends. Dad was employed for 41 years and three months by Hignell Printing as a shipper, receiver, and cutter. He retired on December 31, 1992. Dad was born in the North End on Carruthers Avenue and most of his stories were about time growing up there. Dad had a love for the City of Winnipeg and Manitoba and all its history. If you were ever stuck for a gift, you could never go wrong with a history book or photo book. One of Dad's hobbies was woodworking. There were many pieces that were in his house that were handcrafted. And he also enjoyed the fine art of photography, and the many slides and photos are proof of that. Dad was a member of Atlantic-Garden City United Church for over 70 years. During these years, he was actively involved in many ministry capacities including Youth Group Leader, Mentoring young men, Official Board Chairman, Memorial Fund, Archivist, and was a life member of the Men's Club (AOTS). Dad was not a sports enthusiast, but he was enthusiastic about all the different snacks that would be served. Dad was meticulous in scrapbooking and note taking even before it became popular. Living across from a fire hall was prime location for his love of firetrucks. He was known to drop his yard work to find out where they were going. Heartfelt thank you to the nurses and staff on the second floor Kildonan Personal Care Home for the exemplary care of Dad these last few months. Funeral service will be held at Atlantic-Garden City United Church on Atlantic and Arlington on Tuesday, September 19, 2017 at 1:30 p.m. Elevator access is available. Viewing will be held at Thomson Funeral Home, 669 Broadway on Monday, September 18, 2017 from 6:30 - 8:00 p.m. THOMSON FUNERAL HOME 669 BROADWAY, WINNIPEG, MB R3C OX4 (204) 783-7211 Condolences may be sent to www.thomsonfuneralchapel.com