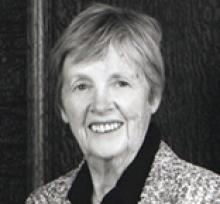 CELINE MARIE KEAR (nee POWER) Celine Marie Kear (nee Power), formerly of Branch, St. Mary's Bay, Newfoundland, passed peacefully away at Victoria General Hospital in Winnipeg, Manitoba on Saturday, September 9, 2017. Predeceased by her parents, Neil and Rose Power; her parents-in-law, William and Isabelle Kear; her brothers, Harold and Leonard Power; her brothers-in-law, Norbert Lake and Doug Kear, and her sisters-in-law, Willa Weiser and Isabelle Kear. Leaving to mourn her husband of 48 years, Allen Kear; her sisters, Maureen Roche (Fred, d.), Mary Power (Amarjit Singh), Pauline Lake Devine (Mike) and Bernadette Cocker (Bruce); her brothers, Wilfrid Bruce Power (Rose), Rev. Peter Power, Dermot Power (Mary Manning, d.) and Tom Power (Ernestine); sisters-in-law, Roseanne Power, Jean Power and Anne Kear; a multitude of nieces, nephews, grandnieces and nephews and extended family members; friends in Newfoundland, especially her lifelong friends Marie Roche, Mona Gillispie and Dorothy Hertzberg; and a wonderful circle of friends and colleagues in her home city of Winnipeg. Celine was the first of 11 children born to Neil and Rose Power of Branch, St. Mary's Bay, NL. The importance of education and a love of reading were instilled early in life and for the first time in the history of small outport schools, an outport student, Celine, was the proud recipient of the Governor General's medal for the highest marks attained in provincial public examinations in 1952. Celine continued her education at Memorial College in St John's and in 1967 graduated from Laval University in Quebec with a Masters cum laude in French Literature. As a Sister of Mercy she taught at Mercy Convent School, St. John's; St. Michael's College, St. George's; St. Brides College Littledale, St. John's; and later at St. Lawrence College, Quebec City. In 1969, she moved with her husband, Allen to Winnipeg where she taught at Vincent Massey Collegiate until her retirement. Her love of teaching continued after retirement, as she taught part time at the University of Winnipeg offering courses on The Works of Jane Austen, The Literary Works of Nineteenth Century Women and on Manitoba History and Heritage. She was actively involved with the University Women's Club and served a two year term as President of the Manitoba Branch of the Canadian Federation of University Women. Celine was a lifetime member of the Jane Austen Society of North America and was instrumental in forming a Manitoba chapter of the Jane Austen Society - in which she was actively involved until her death. Celine's energy and passion for community service were no better demonstrated than by her involvement in the cultural heritage life of Winnipeg. For decades she served with the volunteer sector and charitable non-profit heritage community serving on the Dalnavert Management Committee, the Board of The Friends of Ralph Connor House and Doors Open Winnipeg. She has served as President of Manitoba Historical Society and as President of Heritage Winnipeg. She was Chair of Heritage Winnipeg Fundraising Committee and host of Heritage Winnipeg Fundraising committee events from 2006 to 2016 earning her the distinguished award of Recipient of the Heritage Winnipeg Lifetime Achievement Award for volunteer efforts in the heritage community. Celine and her husband were both bilingual and demonstrated their passion for French culture by their involvement in the francophone community of Winnipeg. As a member of Friends of the St Boniface Historical Society, Celine participated in the activities of St. Boniface University, the Cultural Centre and Cercle Moliere. She was a proud supporter and advocate for the preservation of Gabrielle Roy House Museum. Celine stayed true to her Newfoundland roots, returning each summer in the years following her retirement to reconnect with friends and her ever expanding family of whom she was so fond and proud. She recognized her own heritage in 2000 by the placement of a commemorative plaque on the Family Shop marking three generations in operation. The family expresses gratitude to the staff of Victoria General Hospital for their dedicated care and to the dear friends of Celine who offered such support to her and to her sisters during their time in Winnipeg. Visitation will take place at Holy Rosary Church in Branch on Friday, September 15 from 2:00 p.m. to 9:00 p.m. Mass will be held at Holy Rosary Church on Saturday, September 16 at 11:00 a.m. A celebration of Celine's life will take place in Winnipeg later in October. In Celine's memory, donations may be made to Heritage Winnipeg, Branch Community Centre or to a charity of your choice. Funeral arrangements have been entrusted to Maher's Funeral Home, Placentia, NL. To leave a message of condolence, please visit www.mahersfuneralhome.ca "And I shall have some peace there, for peace comes dropping slow. Dropping from the veils of the morning to where the cricket sings". (WB Yeats)