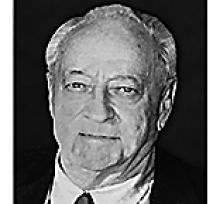 MURRAY HANNAH With family by his side, Murray Hannah passed away August 28, 2017 following an extended period of declining health. Murray was born at the family farm in Arthur Municipality to Gibson and Ruby (Stalker) Hannah August 4, 1925. He received his education at Arthur and Waskada Schools and attended business school in Winnipeg. Murray married Jean (Spence) and they operated their grain farm together. Murray harvested his last crop in 2009 at age 84. Murray and Jean enjoyed travelling to many locations around the world (across Canada and USA, Europe, Africa, Australia, Caribbean, Asia and the Middle East), but they were always happy to return to their welcoming home in Waskada. Murray was an active community member and served on the Village of Waskada council 1965 - 1986, first as a councillor and then as Mayor. He was a charter member of the Waskada Lions Club (1966) and continued to be a Lions member for 50 years, serving as President, being active in all aspects of the club and receiving the Melvin Jones Fellow award. Murray and Jean hosted the Waskada Threshing Day from 1989-1999 on their farm. He worked on the Rail Retention Committee along with other members of the community, and although pleased that the Committee was successful in having the rail line continue for a time, he was disappointed when the last train travelled through Waskada. Murray had a full and active life. He enjoyed a great sense of fun, told wonderful stories of his younger days in Waskada and enjoyed getting together, and also travelling, with friends. He was a strong promoter of Waskada and tried to do his share to make it a vibrant community. Murray is predeceased by his loving wife Jean (2005), son Jim (2014), sister Jean Hamilton (2014), two infant brothers and his in-laws Royden and Lillian Spence. He is survived by his children Clayton (Fran), Don (Sandra Congdon), Jill (Brian Kayes), Ted (Teresa Lietz) and daughter-in-law Barbara Lewis; grandchildren Amy (Guy), David, Ryan (Krista), Dan, Sarah (Rich) and step-grandson Jordan (Jessi); great-grandchildren Joey, Ruby, Valkyrie, Ronin, Angie and Jessica; and many relatives, including special sister-in-law Orry Kirby, and close friends. A memorial service was held September 9, 2017 at 11:00 a.m. at the Waskada United Church with Rev Harvey Hurren officiating. Lunch was served by The Evening Circle at the Lions Hall following the service and interment. The family extends special thanks to Liza Morales, Almira Yanga and Diosa Halnas for their wonderful care over the past few years. Their support enriched Murray's life and we are very grateful. Thank you also to Daughter on Call for the care provided by their staff and to Dinsdale PCH for the professional care and comfort provided to Murray, as well as to the family. Thank you to Paul Smith, Wheatland Funeral Service, for his compassion and guidance. Donations, if desired: Waskada Lions Club, Waskada MB R0M 2E0 or Waskada and Area Recreational Centre (cheque to be written to Municipality of Brenda-Waskada), Box 40 Waskada, MB R0M 2E0. Smith Funeral Home 204-747-2088 www.wheatlandfs.com