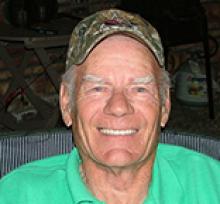 EMILE THEODORE DANDENEAU January 21, 1940 - September 17, 2017 With heavy hearts and family by his side, we announce the peaceful passing of Emile, at the age of 77, after a short courageous battle with cancer. Left to cherish his memory are his wife of 56 years Evelyn, his four children, Louise (Bill), Richard (Diana), Lisa, Robert (Chantalle) and six grandchildren, Meagan, Rylan, Jamie, Gabriel, Lucien, Melody and great-grandson Greyson. He is also remembered by his four sisters, Cecile Encontre, Alma Sobkowich (Ted), Ada Vandersteen (Harvey), Lea Menard. Emile was predeceased by daughter Monique, parents Leon and Anne Dandeneau and brothers Emery and Gerald. Emile was born in Fisher Branch, MB in 1940. He returned to his birthplace in 1970 and together with Evelyn, established and operated Emile's Heating and Ventilating until his retirement in 2010. Emile was an avid hunter and outdoorsman and spent many days with his sons, family and friends on his hobby farm. Winters were spent with family in Yuma, Arizona. Emile was a dedicated community person, involved in his church and was a lifetime member of the Knights of Columbus. Special thanks to family and friends who helped during this difficult time. The family would like to extend a sincere thank you to Dr. Crook and staff at Percy E. Moore Hospital in Hodgson, MB for their compassionate care. Funeral services for Emile will be held at the Immaculate Conception Church in Fisher Branch on Saturday, September 23, 2017 at 10:00 a.m. In lieu of flowers donations may be made to the Fisher Branch Cemetery, Box 445, Fisher Branch, MB R0C 0Z0 or the Fisher P.C.H. Foundation, Box 548, Fisher Branch, MB R0C 0Z0. FISHER FUNERAL HOME INC. In care of arrangements. Fisher Branch, MB 204-372-6803 and 204-372-6271