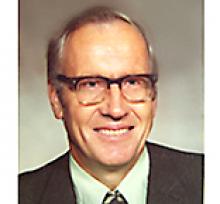 THEODORE TED ERWIN WOLFE Theodore Ted Erwin Wolfe passed away peacefully at the Beacon Hill Lodge Care Home on Tuesday, September 19, 2017 around 11:00 p.m. after having suffered a stroke the previous week. He is survived by wife Mary Wolfe and son Ken Wolfe. His seven brothers Joseph, Felix, Albert, Walter, Adam, Alfred and Wilfred and his seven sisters Helen, Alma, Marie, Ethel, Emily, Cecilia and Elizabeth were all previously deceased. Ted was born in Dauphin, Manitoba on August 2, 1929 and grew up in Valley River. Both his parents died when he was three years old, so he was largely raised by his elder siblings on the family farm. He graduated from Trembowla School and Dauphin Collegiate, then received a teaching certificate at Normal School. He worked at the atomic energy laboratory at Chalk River as a lab technician but decided to take up teaching instead. He returned to Manitoba and taught at a one-room school in Molson, then at Midwinter School in East Braintree where he met his future wife Mary Krysko. They married in 1954 at Robertson Memorial United Church in Winnipeg. He received Bachelor of Science and Education degrees at the University of Manitoba through the Reserve Officers' Training Corps and attended Royal Military College in Kingston where he became a First Lieutenant in the Signal Corps. He taught in Elmwood for two years. His son was born in 1962. They lived in Vancouver for one year then returned to Winnipeg, where he taught mathematics at St. John's High School until he retired in 1989. In his retirement he and Mary traveled as far as England, Scandinavia, Western Europe, South and Central America, the Caribbean, Australia and New Zealand. Ted had great love for gardening, bird watching, astronomy, carpentry, sewing and classical music. For many years he made his own wine, including from many local berries. His was always a life of constant learning, he was an avid reader of many subjects, particularly history, philosophy and science. He taught himself to use a computer and pursued his passion for learning on the internet as far back as when Netscape Navigator was the dominant browser. He always felt that any day was wasted where he did not learn something or teach something. Ted will be cremated and in keeping with his wishes, no services will be held. We request that no flowers be sent but in respect to his love of birds and of learning suggest any donations be made to either Ducks Unlimited Canada or the University of Manitoba Awards and Scholarships programs. KLASSEN FUNERAL HOME 1897 HENDERSON HWY 204-338-0331 Condolences may be sent to www.klassenfuneralhome.com