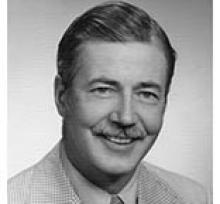 JAMES ROSSLYN MITCHELL MD, FRCSC, FACOG, FSOCG 1920 - 2017 Father, veteran, medical doctor and professor, died peacefully at 97 at his home in Winnipeg on September 14, 2017. Predeceased by his wife Catherine in 2000. Jim is survived by sister Jean Mitchell, daughters, Susan, Sheila, Barbara, Carla; grandchildren, Leah, Sarah, Curtis, Haakon, Martin, Eleanor, Margot, Hugh; and great- grandchildren, Susanna, Cameron, Heidi, Cole, Rachel. Born in Winnipeg on February 21, 1920 to Dr. Rosslyn Brough Mitchell and Della Harvey Mitchell, Jim grew up in a post Second World War era with older sisters Edith and Jean. The family cottage at Victoria Beach was a favourite haunt in his youth. A graduate of St. John's Ravenscourt School, Jim followed his father's footsteps into medicine at University of Manitoba. He graduated in 1944, just in time to marry Catherine Clubb and head off to serve at the tail end of the Second World War. In November of last year, "grandpa" was the featured speaker at his great-granddaughter's (Rachel) class "show and tell". He captivated the grade two audience with stories of his time as a medical officer stationed in England and Belgium. Post war, Jim and Catherine settled in Fort Garry in Winnipeg. It was the cusp of the baby boom and Jim determined that following his father's footsteps in Obstetrics and Gynecology was a worthy path. There are many in Winnipeg who credit him with bringing their babies into the world. In the early sixties, Jim and Catherine bought their own cabin on the rocky shores of West Hawk Lake in the Whiteshell. The lake" remains beloved by all. He taught his girls to fish, sail and paddle their own canoes. Jim had a stint as commodore of the West Hawk Yacht Club. The doc bag came in handy when lake patients would show up with various afflictions - fish hooks, mushroom poisoning, etc. Downhill skiing in Manitoba is only for the intrepid. Jim introduced his girls to the sport at the cozy and still active Falcon Ridge Ski area and then LaRiviere. This spawned a lifelong love of the sport for the family. Catherine's family had farming roots in Morris, Manitoba. Jim and Cathy acquired, along with some of her siblings, her grandparents' farm "Oakwood", on the banks of the Red River. Thus, Jim became a man of the soil as he and Catherine set out to fix up the old farmhouse circa 1906, re-establish the garden and host many family events. Some of the land is riparian hardwood forest. Jim's consideration for nature, led him to conserve 70 acres of the land with the Manitoba Heritage Habitat Corporation. The Canadian Medical Association awarded Jim a lifetime achievement award in 2000 to recognize his contributions to the medical profession as a both a practitioner and Associate Professor at U of M, Faculty of Medicine, Department of Obstetrics and Gynecology. When Catherine died in 2000, Jim moved into the Wellington on Grant Avenue and enjoyed his neighbours and excellent staff. His granddaughter, Sarah Ansueew, of Winnipeg, provided great care to him in his later years. He loved his dinners at Boston Pizza with the great-grandchildren. His was a long life, well lived. An afternoon tea in honour of Jim will be held at the Wellington on Grant Avenue from 2:00 to 4:00 p.m., Friday, October 13. The family will hold a private gathering to celebrate Jim's life at Oakwood on Saturday, October 14. If desired, donations in Jim's memory may be made to Fort Whyte at fortwhyte.org. THOMSON "IN THE PARK" 204-925-1120 Condolences may be sent to www.thomsoninthepark.com ,