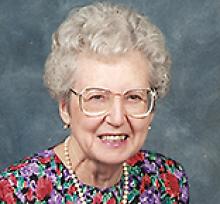 RITA MARGARET GRIMES (FARRELL) Rita Margaret Grimes (Farrell), 98, of Winnipeg, MB, died peacefully in her sleep on September 29, 2017. Born October 16, 1918, in Dauphin, MB, she was predeceased by her husband, Lt. Cdr. George R. B. Grimes, Royal Navy, parents Robert and Gertrude (Graham) Farrell, brothers Gordon (Lila) and Clifford (Rhea), sister Eva (Charles Munday), and nephew, Robert Farrell. In her early life Rita worked in Dauphin and Ottawa as secretary to the Member of Parliament for Dauphin. During the war years she worked in Washington, DC in the Naval Communications Department of the British Admiralty. In July, 1946, Rita married Lt. Cdr. George Grimes, R.N. and resided in England until his death in 1955. On her return to Canada, she was employed by CN Railways, first in Dauphin, then in Winnipeg, retiring from the Purchases and Materials Department in 1982. She enjoyed travelling and spent many vacations with her friends in favourite locations such as, Hawaii, Texas, Barbados, and Puerto Vallarta. Rita was Past President and Life Member of the Women's Auxiliary to the Navy League of Canada, Honorary Life Member of the Navy League of Canada at HMCS Chippawa, a member of Harrow United Church, and a member of Fort Garry Chapter #17, Order of the Eastern Star. She is survived by her son, Graham Grimes, granddaughters Shawna (Daniel Maratta) and Carrie (Gary Magnan), and six nieces and nephews, Ken Munday, Cheryl Klassen (Munday), Linda Dawson (Munday), Nancy Rummery (Farrell), Rhonda Leroux (Farrell) and Darla Ripley (Farrell). Rita chose to be cremated. A private interment in Dauphin, MB will take place at a later date. In lieu of a formal service, a memorial reception will be held in Winnipeg at 2:00 p.m. on Thursday, October 5, 2017 at Thomson Funeral Home, 669 Broadway. Donations may be made to a charity of choice. THOMSON FUNERAL HOME 669 BROADWAY, WINNIPEG, MB R3C 0X4 204-783-7211