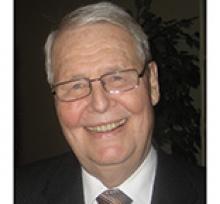 MEL P. MICHENER It is with heavy hearts that we announce the peaceful passing of Mel Michener, our beloved husband, father and grandfather on October 11, 2017. Dad was born on November 27, 1930 to Arthur and Lillian Michener in Minneapolis and moved to Winnipeg at an early age. He was a proud graduate of St. Paul's High School and at the age of 16 entered the School of Architecture at the University of Manitoba. He graduated in 1952 and in 1954 at the age of 24, he and Gerald Libling founded Libling Michener and Associates. He said this was such an exciting time to be an architect in Winnipeg. It was a great time in his personal life as well. The same year he married mom, his beloved Pip (Mary Graham) and they began their loving 62 years of marriage. Dads professional life thrived as did his family as it grew with four children. A family filled with great memories of ski trips to Thunder Bay, Agassiz, Expo 67 and a road trip to B.C. with four kids (letters we found indicate that one might not have been fun for Mom!) and summers spent at the family cottage on Lake of the Woods, which was fun for everyone. There were many Sundays following church they would load us kids into the backseat of the car and the afternoon would be spent checking out buildings that were going up in Winnipeg. He loved this city and was so proud to be a part of building it at that time. Dad became a nationally recognized architect early in his career. He was a Fellow and Member of the Royal Architectural Institute of Canada and a Member of the Manitoba Association of Architects. He worked on many projects at home and abroad where LM Architectural Group was a trusted and valued partner. From the Winnipeg Convention Centre to work throughout the U of M, U of W, Health Sciences Centre, the Victoria Hospital and so many more, Dad and his partners at what is now LM Architectural Group have a legacy of community buildings we are so proud of. As his career progressed he took on many board assignments such as National Trust, the University of Winnipeg as well as the President of the Winnipeg Chamber of Commerce. He loved his profession and continued to go to the office long after his official retirement in 1996. He enjoyed mentoring young architects and continued to be excited by new design. He was an interested and curious person and while he was proud of his part in Winnipeg's past he was most interested in what was coming next and loved when he could be part of those discussions. His work pales in his commitment and love for his family and especially our mom. They were partners to the end as dad faithfully provided care for mom at home until it was not possible and then he visited everyday when she moved to River Park Gardens. Theirs was a love story full of friends, family and travel as they explored Europe, the Caribbean and the best spots in North America. They loved socializing, whether it was at St. Charles, Manitoba Club or in the homes of their many friends. They loved entertaining at 75 Darcy Drive, the home dad designed and lived in for over 50 years. He was simply excited by life. Always interested in politics, art and so appreciated good food. He wanted to know what his grandchildren were working on, what their opinions were, what they were excited about. He golfed from the time he was 12 until a few years ago and he so enjoyed sharing that passion with his grandsons. He had a deep love of music from classical, jazz and broadway. Listening to music at the end of his life still brought a beautiful smile to his face. He is survived by his wife Pippy, daughters, Kathleen, Anne Keast (Barry), Sarah and son Arthur (Joan). Honourary daughter/niece Kim Halverson (Rob), his sister Martha Evans (Lorne), sister-in-law Susan Graham and brother-in-law Joe Graham (Carolyn) and 11 nieces and nephews whom he knew well and all thought the world of their Uncle Mel. His grandchildren whom he was extraordinarily proud as they were of him, Branden Keast (Andrea), Riley Keast (Christy), Michael Keast, Brittany Alwis (Shawn), Chad Michener (Erika) and Jasmyn Michener (Reece). Great-grandchildren, Hudson, Shea, Sloane, Lennon, Jackson, Sevey and Ivy. The family would like to thank the wonderful caregivers who have been such an important part of his life in the last few years. Many thanks to Lucy, Terry and Marcia. Words can't express how grateful we are. Dad loved a party and in that fashion we are celebrating his remarkable life on Tuesday, October 17 at the St. Charles Golf and Country Club at 5:00 p.m. Please join us in toasting and sharing stories about our remarkable father. Earlier in the day we will be celebrating mass at 10:30 a.m. with Father Mark Tarrant presiding at St. Vital Catholic Church, 1629 Pembina Hwy. We would be so honoured by those who would like to join us as well. In lieu of flowers donations may be made to the Mel P. Michener Architectural Fellowship at the University of Manitoba. Dad you were a true gentleman in every sense of the word. Yours was a life well lived with kindness, honour, grace and dignity. You loved and you were beloved. Well done!