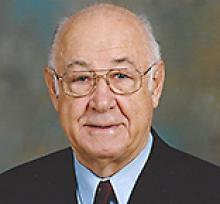 WALTER BUSHUK C.M., Ph.D., LL.D., F.R.S.C. With sadness, the family announces the peaceful passing of Walter Bushuk, at Poseidon Care Centre, on Saturday, October 14, 2017. Walter is survived by his loving wife of 62 years, Jean (nee Huston), sons: Darrell (Deborah Harri) and their children Mitchell (Minju Bae) and Daniel (Brooke Semchuk), and Donald (Rosemarie) and their children Luke and Kyle. He was predeceased by his parents, brother Mike of Toronto, and sister Minnie of Dauphin. Walter was born on January 2, 1929 in the village of Jakovichi, Eastern Poland, now Belarus. In 1939, his parents brought the family to Canada in search of a better life for the three children. The family settled on an 80-acre farm in Garland, Manitoba, where, at the age of 10, Walter began his Canadian education knowing only a few words of English. He went on to earn a B.Sc. (Hons.) and M.Sc. in biochemistry at the University of Manitoba and a Ph.D. in physical chemistry at McGill University. Walter completed his scientific training with a year of postdoctoral studies at the Macromolecular Centre in Strasbourg, France. Walter's professional career included positions at the Grain Research Laboratory, Ogilvie Flour Mills and the Canadian International Grains Institute. However, he found his true calling as Professor in the Department of Plant Science, University of Manitoba. He retired in 1993, but continued research as Professor Emeritus. Walter held three administrative positions at the University, including Head of Department of Plant Science, Associate Vice-President (Research Administration) and Head of Department of Food Science. Walter's research, mainly on the biochemistry of wheat quality, has received international acclaim. Walter was at the forefront of his field on a worldwide basis. He, together with his students and scientific colleagues, published over 300 scientific and technical articles and edited several books. Over 40 scientists from 27 countries came to Winnipeg to train with him. Walter was most proud of the legacy of these students, who are now spread around the world working on cereal science. In recognition of his research achievements, Walter received many international awards, including an Honorary LL.D. (Poznan, Poland), three international scientific medals, and fellowships from five scientific societies, including The Royal Society of Canada (F.R.S.C.) and the Osborne Medal from the American Association of Cereal Chemists. He was honoured by the University of Manitoba Alumni Association with the Alumni Jubilee Award. In 2001, his postgraduate students and research colleagues held a one-day symposium and published a commemorative book, Wheat Quality Elucidation: The Bushuk Legacy, in his honour. In 2003, he was appointed Member of the Order of Canada for outstanding lifetime contributions in research and teaching. Walter attributed much of his success in scientific research to the unfailing love and support of his wife Jean and other members of his family. Besides his scientific endeavors, Walter was active in the community. He was an Elder of the Sturgeon Creek United Church, President of the Sturgeon Creek Community Club and President of the Victoria Beach Club. He served on several international volunteer assignments for the Canadian Executive Service Organization. Walter enjoyed summers at Victoria Beach, socializing, playing and watching tennis and playing bridge. He adored his grandsons and took a keen interest in their education, sports and other activities. Walter cherished his Canadian citizenship and was especially appreciative of the opportunity Canada gave him to study, work and raise a family. A memorial service will be held at the Fort Garry United Church, 800 Point Road, on Friday, October 27, 2017 at 1:00 p.m. Cremation has taken place. Interment at the Victoria Beach Cemetery will be held at a later date. In lieu of flowers, donations may be made to the University of Manitoba Faculty Development Initiatives Fund (Winnipeg, MB R3T 2N2) or a charity of your choice. The family thanks the staff of Poseidon for their compassionate care throughout his stay, especially during his final days. Wojcik's Funeral Chapels & Crematoriums, Winnipeg, 2157 Portage Avenue, 204.897.4665 www.wojciksfuneralchapel.com