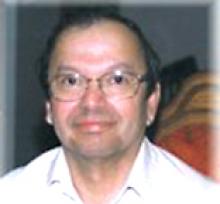 KENT GORDON STEPHENS VANDERPUT August 24, 1936 - September 27, 2017 At the age of 81 years, Kent passed away at the River East Personal Care Home. He will be sadly missed by his wife June and son Julian; sisters, Jean (Andrew) Allan of Scotland, Shirley (Geoff) Duncan of England, Maureen of Australia, Geraldine (Jim) Richber of Ontario; many nieces and nephews in Singapore, Europe, China, Malaysia, Sri Lanka, Australia, USA and Iraq; and sisters-in-law Jackie and June. Kent was predeceased by his parents Lawson Tate and Bernice Vanderput; brothers William, Valence, Lawson Jr., Melville; sisters, Mary, Irene, Phyliss, Olive; sister-in-law Nina and brother-in-law Andrew. Kent was born in Singapore, and graduated as a school teacher from the National University. He became the President in Singapore of the Scripture Union for five years. He came to Canada in 1969, obtaining a Principal's position in Cape Breton, N.S. Kent obtained his Masters and Doctorate from Dalhousie and St. Mary's universities in Halifax, N.S. The following year he became Director of Education for many years with the federal Department of Indian and Northern Affairs, working in Alberta, Saskatchewan, Manitoba and Nova Scotia. He was a Blood Brother to the Cree Nation, and an advocate for Aboriginal educational rights. Kent's name among First Nation people was "Little Man Big Stick". The Memorial Service for Kent will be held Saturday, October 28, 2017 at 1:00 p.m. at St. Aidan's Anglican Church, 274 Campbell Street, Winnipeg. The Interment has already taken place at Glen Eden Memorial Gardens. A reception will follow the Memorial Service in the lower Church hall. With sincere appreciation the family wishes to thank all friends, neighbours, and others who offered comfort, and support in cards, food, flowers and memorial donations. Thanks to Rev. Labdon for his wonderful service at the Interment and to the staff on Courage Bay and Charity Road at River East Personal Care Home. Your love and compassion will always be remembered. Donations in Kent's memory may be made to St. Aidan's Christian School via www.staidansschool.ca or to 418 Aberdeen Avenue, Winnipeg, MB R2W 1V7. KLASSEN Funeral Home 1897 Henderson Highway, Winnipeg, MB (204) 338 0331 Condolences may be sent to www.klassenfuneralhome.com