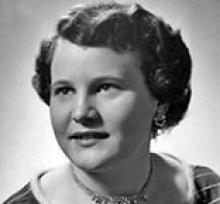 MARY WOLFE 1933 2017 Mary Martha Wolfe passed away peacefully at the Concordia Hospital on Tuesday, October 17, 2017 after having suffered a stroke in September. She is survived by son Ken Wolfe; sisters Polly and Lena, and brother Teddy; and also by many nieces, nephews, grand-nieces and nephews who knew her well. She had survived Theodore, her husband of 63 years, by only one month. Her brothers Stanley, Henry, Victor, and Eddie were all previously deceased. Mary was born as Mary Krysko in East Braintree, Manitoba on March 16, 1933 and grew up on the family farm there, raised by father Mike and mother Mary alongside her brothers and sisters. East Braintree is where she met her future husband, Theodore Wolfe, who was working as a teacher at Midwinter School. They married in 1954 at Robertson Memorial United Church in Winnipeg. Their son Ken was born in 1962. They lived in Vancouver for one year then returned to Winnipeg and bought the house where they were to live for the rest of their lives. Mary worked for a number of years as a secretary, first at Marshall Wells and then at the Bank of Montreal and finally in the Manitoba Department of Education. In later years she and Theodore traveled as far as England, Scandinavia, Western Europe, South and Central America, the Caribbean, Australia and New Zealand. Mary had great love for music, and particularly she loved singing. For several years she was in the Sweet Adelines choir where she sang barbershop harmony. At the Robertson United Church where she had been married she sang in the choir alongside her sister-in-law Carole Krysko and her friend Pat Quint. She was also very athletic and enjoyed a number of sports including curling, badminton, and tennis. She loved playing cards, particularly cribbage and bridge. She was a great fan of British drama and mystery television series. She was a very accomplished cook, often drawing from a large set of recipe books that she had collected over the years. Mary always made a great effort to keep in touch with family no matter how far away they were. Friends and family alike will miss her visits, her long talks, and her family Christmas newsletters. Mary will be cremated and in keeping with her wishes, no services will be held. We request that no flowers be sent and if friends so desire, donations in Mary's memory may be made to the Heart and Stroke Foundation of Manitoba. KLASSEN FUNERAL HOME 1897 HENDERSON HWY 204-338-0331 Condolences may be sent to www.klassenfuneralhome.com