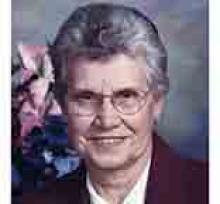 BETTY J. FRIESEN 1930 - 2017 Betty Friesen of Winkler, MB formerly of Winnipeg and Plum Coulee passed away Tuesday, October 17, 2017 at Salem Home, Winkler with family by her side. Betty was born August 28, 1930 to Abram and Elizabeth Friesen. She was the oldest of four children. Betty attended the Hoffnungsort school near Plum Coulee and continued on to the Winkler Bible School. Her time at Winkler Bible School helped to strengthen her faith and was an important part of her decision to become baptized. She accepted Jesus as her Lord and Saviour on April 16, 1949. On September 17, 1950 she was baptized upon confession of her faith at the Winkler Mennonite Brethren. Betty grew up on the family farm north of Plum Coulee. At 23 she moved to Winnipeg where she joined the South-end Church, which later became the Portage Avenue MB. During her years in Winnipeg she started her work as a nanny and in 1955 she began her 27-year career with the Kimberley Clark-Paper division. When the factory was relocated to Ontario she made the decision not to move with the company, as she was not wanting to leave her parents, siblings and nieces and nephews. From there she spent the next ten years working at Woolco before retiring. Travelling with friends was something Betty loved to do. There was often another trip being planned before the current one was done. Europe, Mexico, Hawaii, and Alaska are just a few of the places she loved to visit. Weekly Bible studies and league bowling were also highlights for her. She could often be found doing embroidery or knitting various different projects. In her retirement she spent time volunteering at church, for the Canadian Bible Society and at Bethel Place. Betty loved to spend time with family and always enjoyed hearing what was happening in the lives of her nephews and nieces. Her door was always open when we wanted to come for a visit. In 2010 when her health was starting to decline she made the decision to move to Garden Park Estates in Winkler. In December of 2012 she was moved to Salem Home. Betty is survived by one brother Abe and Dora Friesen; two sisters, Kathleen Toews and Mary Giesbrecht and many nieces and nephews and their families. She was predeceased by her parents, Abram and Elizabeth Friesen, brothers-in-law, Willie Toews and Ben Giesbrecht and one nephew Donald Grant Friesen. A private service was held with interment at the Plum Coulee Cemetery. The family would like to thank all the Winnipeg friends she made while living there for being such a big part of her life. Thank you to the staff at Salem Home for the excellent care Betty received while there and to Wiebe Funeral Home, Winkler for your compassion and care during this time. Wiebe Funeral Home, Winkler In care of arrangements wiebefuneralhomes.com