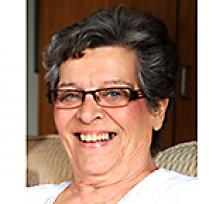 GLENNA MILLER After a long and fruitful life, enriched by travel and time spent with family and her wide circle of friends, Glenna died peacefully on October 23, 2017, with her family by her side. Having lost her first child, Darla, in infancy, Glenna, together with Dennis, her late former husband, went on to raise three children, who along with their families will remember her with love and miss her greatly: Lori and her husband, Ron, and children, Alenna and Grant; Jeff and his wife, Marlis; and Scott and his wife, Janet, and children, Cassidy and Kirsten. Sister Jean and her family, along with the family of sister Joan, who predeceased Glenna, will cherish her memory. Glenna was born in Moose Jaw on May 6, 1933. After spending her formative years in Hodgeville, she moved to Regina in 1951 to study nursing at Grey Nuns' Hospital. Three years later, diploma and nurse's cap in hand, Glenna relocated to Weyburn, the first of many stops in a career that would span four decades and take her from general duty nursing and public health in several small communities to Director of Nursing at Russell District Hospital and running the nursing station in Dawson City, Yukon. Glenna retired and returned to Russell in 1996, where she would remain an active member of the community until moving to Winnipeg in 2008 to be closer to her four growing grandchildren. As important as her nursing career was to her, Glenna's focus was always squarely on her family. Her children will remember her for her encouragement and support in every endeavour they took on, including more than a few that must have seemed somewhat foolhardy to her at the time, and for instilling in them a passion for learning and travel and an openness to experience different things. Her grandchildren will never forget how she would turn their favourite characters into wondrous birthday cakes year after year, secretly supplement their vegetarian diet with the occasional bacon fry-up, and enthusiastically follow them around the city to cheer them on from the sidelines or bleachers in one or another sporting event, or applaud louder than anyone else at the conclusion of another musical performance. All who were fortunate enough to know Glenna and call her a friend will remember her for her strength of character, her sense of humour, her faith (evident both in her involvement with the United Church and her many years as an Eastern Star member), her willingness to always lend an ear, and her loyalty (how many can lay claim to friendships that endure for more than 60 years?). Glenna considered herself blessed for being able to call Portsmouth home for the last three years. Her family is grateful to the staff there for the kindness they showed her, and in particular for their tremendous support in recent months. They would also like to thank the ICU doctors and staff at the Grace Hospital for their wonderful care and compassion. Glenna's life will be celebrated at a funeral service on Friday, October 27, 11:00 a.m., St. Andrews River Heights United Church, 255 Oak St., Winnipeg. A light lunch will be provided following the service. In keeping with Glenna's love for bright, sparkly attire, those who are able to attend are invited to embrace her style. If friends so desire donations in Glenna's memory to may be made to the Children's Wish Foundation, Diabetes Canada, or to another charity of their choice. Remembrances may be shared with the family at www.braendlebrucefs.ca Braendle-Bruce Funeral Service of Russell is in care of arrangements. (204) 773-2747