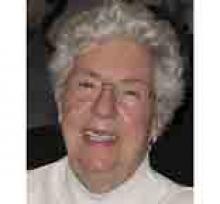 MARGARET CRUICKSHANK (PIDGEON) December 20, 1923 October 1, 2017 The family would like to announce that after a brief but brutal battle with cancer, Margaret passed away in her sleep on October 1, 2017. She was 93 years old. Mom was born and lived all of her life in Winnipeg and she was a fierce defender of the city and of her beloved Blue Bombers if anyone dared to criticize them. She grew up in the west end during the Depression, attending Greenway Elementary School, General Wolf and Daniel McIntyre Collegiate. After graduating, she got a job at City Hydro where she met Alex Cruickshank the future love of her life. Of course, the Second World War interfered with that a bit. They were married after the battle in the Atlantic ended and before Alex was to be shipped to the west coast to join the war efforts there. When dad returned from the war, they settled down first on Clifton Street and later in Windsor Park. Mom was a housewife and mother, until eventually returning to the work force in the Customer Services Department of Eaton's. When dad and mom retired, they enjoyed numerous trips to Hawaii, Florida, Texas, Europe, the Bahamas, and even a Caribbean Cruise - as well as enjoying every summer at their beloved Lake Austin. To make their travelling easier, they moved to Brantwood Estates in 1989. When dad passed away in 1999, mom was devastated but, true to her spirit, she kept a positive attitude although she missed him every day of her life. Mom moved into Dakota House in 2012 when she found it difficult to manage on her own but she continued to live a full and happy life until an aggressive and insidious cancer struck in late July of this year. Mom is survived by her three children, Ron (Joan) Cruickshank, Joan (Will) Miller and Linda (Fred) Heinemann. She was an amazing grandmother to Angela (Christopher), Kristoffer (Julie), Brant (Jessica), Bryn (Reagan), Evan and Adam. Although she was not quite as active with them, mom adored her three great-grandchildren, Gunnar, Loa, and Oliver. The family would like to thank the medical staff of 5 North at Victoria General Hospital for their kind and sensitive care for mom in her final days. A memorial service celebrating mom's life will be held at St. Bartholomew's Anglican Church at 10:30 a.m. on November 4, 2017. In lieu of flowers, the family requests that donations be sent to CancerCare Manitoba, 1160-675 McDermot Avenue, Winnipeg MB, R3E 0V9 or at their website donate@cancercare.mb.ca Mom, we love you, we miss you, and we will remember you always. Our only consolation will be that you are once again with the love of your life. Say "hi" to dad for us. THOMSON FUNERAL HOME 669 Broadway, Winnipeg, MB, R3C OX4 783-7211