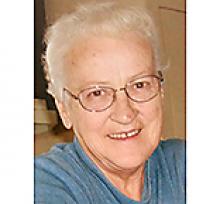 JANET IRENE O'BRIEN On Wednesday, October 25, 2017 at the Brandon Regional Health Centre, Brandon, MB, Janet Irene O'Brien (nee Hansley), aged 72 years, beloved wife of 53 years of Ralph O'Brien of Holland, Manitoba. Besides her loving husband, she leaves to mourn her five children: Theresa Johnson (Brent) of Sidney, MB, Lance (Diane) of LaGlace, AB, Regina Farrell (Lorne) of Anola, MB, Charmin O'Brien of Ashland, Kansas and Tracy O'Brien (Dan) of Portage la Prairie, MB; her sisters, Doreen (Alan) Lowe, Barb Baxter, Linda (Steven) Letniak and Betty (Ken) Martin, one brother Ted (Rhoda) Hansley; brothers-in-law, Jim Colvin and Ray O'Brien; her pride and joy, 14 grandchildren and 19 great-grandchildren, and numerous nieces and nephews. She was predeceased by her parents, Norman and Rhea Hansley, sisters Norma Colvin, Patsy Hansley and Dean Newmann, numerous brothers-in-law, two special uncles she held dear, Bill and George Hansley; her mother and father-in-law, Mable and Harvey O'Brien, brothers-in-law Sam O'Brien and Merv O'Brien, and one special sister-in-law Pat Helliwell. Graveside service will be held in Sidney, MB, on Wednesday, November 1 at 11:00 a.m. with a gathering for fellowship to follow at the Holland Community Centre at 2:00 p.m. In lieu of flowers, donations may be made to the Canadian Cancer Society, the Holland Health Clinic or a charity of one's choice. "The angels are dancing tonight" Condolences may be left at our website: www.ronaldmoffitmemorialservices.com /obituaries