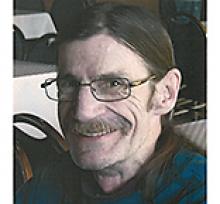 GARY ALLAN NORRIS It is with great sorrow that we announce the passing of Gary Allan Norris. He was born July 12, 1954 in Sherbrooke, Quebec. He lived and stayed in Winnipeg for over 40 years. He is survived by his father Alan Norris. Proceeded by his mother Juanita Mouldy. Also survived by his children, Brandi "his Tiffany" (James), Marshall (Lillian), Conrad, Karly, Colleen (Shaun), Cameron, Mike and 17 grandbabies. Sister Cheryl (Mike) Martel, sister Kimberly, brother Stephen and one niece and one nephew. Special friends, Maggie, John, Sandy, Don, Al, Al L, Tory, Mike, Ken, Kenny, Mae. His Heart song friends, nine circles friends, Dr. Ireland. Sister Mary as Clergy and Ken doing the eulogy. Funeral will be held on Tuesday, November 7, 2017 at 2:00 p.m. at Thomson Funeral Home, refreshments to follow. Thanks to HSC of Winnipeg and many friends in the community and Thomson Funeral Home (Aaron). Father you were a dad to so many souls. Oh how great was that! We love you so much. R.I.P THOMSON FUNERAL HOME 669 Broadway, Winnipeg, MB, R3C OX4 (204) 783-7211 Condolences may be sent to www.thomsonfuneralchapel.com