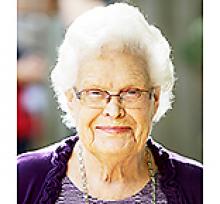 ELSIE MAY SIMS (nee POYSER) October 13, 1924 - November 3, 2017 Elsie May Sims passed away peacefully, with family by her side, on November 3, 2017, at the age of 93, in Portage la Prairie, MB. Born on October 13, 1924, Elsie grew up to be an optimistic and ambitious wife, mother, grandmother, great-grandmother, sister, aunt and friend. Raised on the family farm in the Emeline District near MacGregor, Elsie was instilled with a strong drive for education and desire to explore the world. After completing high school in Austin, MB in 1942, Elsie completed her nursing degree at Winnipeg's Misericordia Hospital and moved to Atlanta, Georgia to practice nursing at Emory University Hospital. After several years, Elsie moved to Toronto and in 1950 married her husband of 40 years, Frank Sims, also originally from the MacGregor area. Family and farming were the cornerstones of life for both Elsie and Frank. Moving back to Manitoba in 1951, Elsie continued nursing at the MacGregor Hospital while, together with Frank, taking over management of the Poyser family farm in Emeline. Here Elsie continued the longstanding tradition of hosting family, friends and community at the farm regardless of season or reason. These strong family ties led to many close friendships with distant relatives in Australia, the US and United Kingdom and many trips abroad with Frank to visit them. Every visitor to the farm learned quickly of Elsie's love of gardening. With expertise in geraniums, hibiscus trees, raspberries and rock gardens, well tended plants were her trademark wherever she lived. In later years, she focused on raising clivia flowers, giving away many to friends and neighbours. From an early age music was a pillar of Elsie's life. After taking advanced piano training through high school, Elsie joined many choirs throughout her life including her longstanding participation in the MacGregor United Church choir. The passion for rhythm also led to Elsie and Frank becoming involved in Manitoba's square dancing community in the 1960s. Lifelong friendships with couples from across Manitoba kept Elsie attending square dance gatherings and jamborees until her early 80s. A lifelong member of the Manitoba Agricultural Museum, Elsie volunteered in many ways but was best known for her special potato salad recipe at the Dining Hall during the Manitoba Threshermen's Reunion and Stampede. In 2004 Elsie was recognized for her contributions by being inducted into the Museum's Fellows Association. Elsie embraced life's changes with optimism and energy. After Frank's passing in 1990, Elsie moved, with her house, to MacGregor. She continued hosting family events like the annual Poyser cousin's golf tournament and reveled in the chance to develop new gardens from bare ground. Moving into the Victoria Place assisted living complex in 2016, Elsie thoroughly enjoyed afternoon tea with her new neighbours and watching the development of the site's lawn and gardens from her second story suite. Elsie was predeceased by her beloved husband Frank Sims, parents Trevor and Miranda Poyser, brother Lindsay Poyser and sisters-in-law Evelyn and Alice Poyser. Elsie leaves to celebrate her life son Curtis (Gloria) Sims, daughter Eunice (Doug) Pratt; grandchildren Dan (Courtney), Elliot, Nathan (Janet), Brooklyn (Zac) and Courtney (Nelson); great-grandchildren Anson and Miranda, brother Ted Poyser, and many family and friends. The family would like to thank the staff of the Portage la Prairie General Hospital for their excellent care and compassion in Mom's final days. Should friends so desire, donations in Elsie's memory may be made to the North Norfolk Foundation's Manitoba Agricultural Museum Artifacts Fund or a charity of one's choice. A celebration of Elsie's life will take place at 2:00 p.m., Wednesday, November 8, 2017 at the MacGregor United Church in MacGregor, MB. Clarke's Funeral Home, Gladstone - MacGregor www.clarkesfuneralhome.com