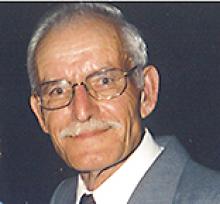 NICHOLAS DOHIE Formerly of Russell, MB passed away on Sunday, November 12, 2017 at the Valleyview Care Centre, Brandon, MB at the age of 91 years. Nick is survived by his children: Margaret (Matthew) Peech of Steinbach, MB, Dolores (Pierre) Cyr of Ottawa, ON, Dennis (Mickey Brownridge) Dohie of Russell, MB, 5 grandchildren, seven great grandchildren, half-sisters Doris Burla, Lee Walker, Vera Davison, Jean Ziprick, half-brothers George Dohie, John Dohie and Glen Dohie. Prayers will be said on Wednesday, November 15, 2017 at 7:00 p.m. from the Braendle-Bruce Funeral Chapel, Russell. The funeral service will be held on Thursday, November 16, 2017 at 10:00 a.m. from the St. Elijah Romanian Orthodox Church, Lennard, MB with interment following in the St. John the Baptist Orthodox Cemetery, Shell Valley, MB. If friends so desire, donations may be made to St. John the Baptist Orthodox Cemetery Fund, P.O. Box 1241, Roblin, MB R0L 1P0. Condolences may be shared with the family at www.braendlebrucefs.ca Braendle-Bruce Funeral Service of Russell is in care of arrangements. (204) 773-2747