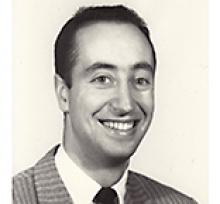 ERNEST ROMEO GAUDREAU December 29, 1932 - November 25, 2017 With heavy hearts we announce the peaceful passing of our dad and grandpa, Ernie Gaudreau, surrounded by his family, on November 25, 2017 at the age of 84. Ernie is survived by his children Guy (Melanie), Todd, Erin (Rob) Crozier; and granddaughter Samantha Crozier. He is also survived by his younger brother Gerry (Eveline); sisters-in-law Margaret and Florence; as well as numerous nieces, nephews and other extended family. He was predeceased by his beloved wife Joan (2016); eldest son Mark (1991); parents Napoleon and Hosanna Gaudreau; sisters Alice (Wilf) and Yvette (Tony); brothers Rolly (Martha), Danny and Roger. Dad grew up in the heart of St. Boniface and graduated with a Teaching Certificate from St. Boniface College. He began his teaching career at Norberry School and eventually became the Phys-Ed Supervisor for the St. Vital School Division for 33 years. Through their mutual love of sports, Ernie met Joan, the love of his life, and they married in May 1959. Dad was a well-respected educator, coach and mentor and was also instrumental in the implementation of a number of programs and events within the school division, some of which still exist today. He also volunteered on various committees and groups and was very involved in the Norberry Community Club and St. Vital Minor Hockey Association. We were so proud to see our dad inducted into the Manitoba Lacrosse Hall of Fame in 2012 (player), Manitoba Basketball Hall of Fame in 2013 (coach), and to have his name placed on the Glenlawn Collegiate "Wall of Fame" in 2010 as a Builder, acknowledging his considerable contributions to that school's sports programs. In addition to Dad's dedication to the community, he always made the time to coach, support and encourage all four of his children in their own athletic pursuits. Dad was famous for his juicy burgers, homemade fries and super duper deluxe sandwiches, which we grew up on. We have fond memories of shooting hoops on the driveway, wrestling matches in the living room, day trips to Grand Beach, swimming at Centennial Pool, summers at Winnipeg Canoe Club, and family vacations in Gimli. Post-retirement, Dad's interests extended to golf, curling, weekly gatherings with his buddies, and spending time with family, especially his granddaughter Samantha, whom he adored. They shared many fun times singing, dancing and putting on a show together. Cremation has taken place and a memorial service will be held on Saturday, December 2, 2017 at 10:00 a.m., at Thomson "In the Park" Funeral Home, 1291 McGillivray Boulevard. Special thanks to the staff at Health Sciences Centre Emergency and Unit D5. In lieu of flowers, donations may be made to the Alzheimer Society of Manitoba. THOMSON "IN THE PARK" 204-925-1120 Condolences may be sent to www.thomsoninthepark.com