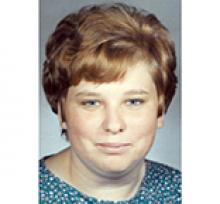 MARY-ELLEN AUDREY ALLEN (nee RUSSELL) With heavy hearts the family of Mary-Ellen Audrey Allen (nee Russell) announces her passing on Monday, November 27, 2017, at the age of 66 years. Mary-Ellen is lovingly remembered by her husband Robert; her children, Ronald and Margaret-Lea (Dustin); sister-in-law Linda Mae (Peter); brothers-in-law, Edward and Charles (Bev); nieces, Amanda (Bill), Christina (Tom), Samantha and Elizabeth (Richard); and nephews, Brody James (Karen), Cory, Andrew (Krista), and Peter (Sarge); and grandchildren, Sean, Emily and Tobias, along with numerous great-nieces and great-nephews. She is predeceased by her parents, William and Audrey; her siblings, Laurie and Bill (Bev); and nephew Paul (Joanne). Mary-Ellen was born on July 2, 1951 in Espanola, Ontario. After attending university in Toronto she moved to Edmonton, where she met and married her husband, Robert. The family later moved to Manitoba, settling in Winnipeg, where Mary-Ellen worked as an executive secretary at Misericordia General Hospital until she discovered her love of nursing. She was voted valedictorian upon graduating from the Misericordia School of Nursing, and subsequently worked at Deer Lodge Centre until she gained a position in the Geriatric Rehabilitation Program at Seven Oaks General Hospital. In 2002, she took on the challenge of becoming a Facility Patient Care Team Manager at Seven Oaks. Mary-Ellen loved working with the team at Seven Oaks, and over the years received several awards for Leadership and Nursing Excellence. Mary-Ellen enjoyed reading and camping with her husband, listening to music with her son and participating in Job's Daughters activities with her daughter. Mary-Ellen often travelled to Minnesota to attend the yearly Jobie Camp, where she became well-known as the "Queenie of the Water Weenie". A celebration of Mary-Ellen's life will be held at 1:00 p.m. on Tuesday, December 5, 2017, at Crescent Fort Rouge United Church, 525 Wardlaw Avenue, Winnipeg, Manitoba, with Irene Greenwood presiding. The family would like to take this opportunity to thank the staff on 5 East at St. Boniface Hospital for their expertise and kindness in caring for Mary-Ellen. In lieu of flowers, please consider making a memorial donation to the St. Boniface Hospital Foundation. KLASSEN Funeral Home 1897 Henderson Highway, Winnipeg, MB (204) 338 0331 Condolences may be sent to www.klassenfuneralhome.com