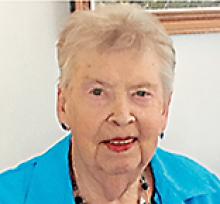 DONNA KATHLEEN NABE (nee BEATTIE) April 15, 1932 - December 9, 2017 Donna Kathleen Nabe entered eternal rest at the Crocus Court Personal Care Home, Roblin, Manitoba, at the age of 85 years. Donna was born in Makaroff, Manitoba, and was the eldest daughter of Johnnie and Kay Beattie. Donna completed her education in Makaroff, Togo, Normal School in Winnipeg, and at the University in Saskatoon. Her first teaching position was by permit in Stratford and later in Makaroff and Togo. In July 1953, Donna married Harold and they lived in Makaroff where she continued to teach. They later moved to Togo, where they opened Togo Motors and Donna taught school. Donna also assisted in the running of Togo Credit Union and was the secretary/treasurer of Togo & District Cemetery Committee. In later years, Donna took great joy in assisting Clifford out at the farm, making meals and hauling grain at harvest time. The family would like to thank all of those who cared for Donna during the past several months, including Home Care, the Doctors and Nurses in Roblin Hospital and Crocus Manor. Donna will be greatly missed by her sister Ilene, brother Clifford (Linda), sister Beryl (Ross) and all of her nieces and nephews. She was predeceased by her husband Harold in 1978. In respect of Donna's wishes, there will be no funeral. A graveside service with family was held at the Togo & District Cemetery on December 14, 2017 with Grace Skomorowski officiating. Pallbearers were Don Penniston, Jack Penniston, Doug Radford, Doug Beattie, Everett Wilson and Ralph Hilderman. If you wish to express your sympathy please make a donation in memory of Donna to either the CNIB, or the Lions Foundation of Canada Dog Guides. A memorial tea will be held in honour of Donna in Roblin, Manitoba at a later date. Donna will live on forever in our hearts. NairnChyz-Wolkowski Funeral Service Ltd.Nairn-chyzfuneralhome.com 1-204-937-2111