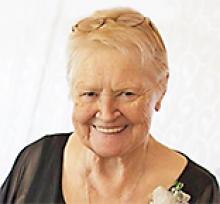 EVELYN GYLES Evelyn Gyles (nee Flaws) passed away peacefully December 14, 2017 at the age of 85, with family at her side. Evelyn will be lovingly remembered by her husband and lifelong partner of 62 years, Norman Gyles, her five children: Jennifer (Jim Wilderman), Geoffrey (Jennifer), Heather, Norman (Shelley) and Garry (Shannon); her 10 grandchildren: Brittany Wilderman (Shaun Tucker), Tessa Wilderman, Jason Gyles, Collin Gyles (Lindsey), Lindsay Tashiro (Ryan), Nelson Boyce, Veronica Boyce, Kaitlyn Gyles (Mike Arsenault), Blake Gyles, Jesse Gyles, and her six great-grandchildren: Lyla and Everett Tucker, Charlotte Gyles, and Patrick, Victoria and Grace Tashiro. She also leaves to mourn her loss: brother Lawrence Flaws (Allison), sisters-in-law Pat Flaws, Maureen Fenn and Nancy Gyles (Tim Weir), and brother-in-law Billy Gyles. Evelyn was predeceased by her parents Frank and Eva Flaws, her brother Bill Flaws, and sister-in-law Marilyn Kains. Frances Evelyn was born November 16, 1932, at home, in the middle of a snowstorm in the rural Mayfield, Manitoba area, eldest sister to brothers Bill and Lawrence. She enjoyed sharing stories of her early life such as riding to the local one-roomed schoolhouse by horse and wagon. Following graduation from Daniel McIntyre Collegiate, she attended Normal School and received a teacher's certificate. After teaching for one year in Petersfield, she worked at Daly Display until she met and married Norman in 1955. Together they raised five children, always with a family dog and cat. As her family grew, Evelyn began a career with the University of Manitoba in the Financial Aid and Awards Department, where she continued to work until her retirement in 1997. Evelyn had a lifelong desire to learn. In 1981, at the age of 49 and while raising her family, Evelyn obtained a BA in Religious Studies at the University of Winnipeg by taking a night course annually for 15 years, demonstrating her sheer determination to succeed. Evelyn was an avid reader, reading everything from fiction to history, magazines, journals, cookbooks, atlases, and even dictionaries. She had an amazing memory and could have challenged any Jeopardy contestant. She knew the names of all the trees, plants, flowers, and berries as well as birds and wildlife. She had a keen interest in geography and history, especially her family history. Her attention to detail was evident in her ability to remember all relatives' birthdays and significant annual events. You could count on a card in the mail in her familiar handwriting, as well as a phone call wishing you well. She was always in attendance at special family events. Throughout Evelyn's life her strength of character was demonstrated in her dedication and love for her family, her kind strength and quiet courage. She was very accepting, and her mild manner was her endearing trait. Evelyn will forever be remembered as a calm, patient, and devoted wife, sister, mother, grannie, great-grannie, and aunt. We will all miss her. The family wishes to thank the staff at Seven Oaks for the care and comfort they provided Evelyn in her final days In lieu of flowers, donations can be made in Evelyn's name to the Heart and Stroke Foundation or a charity your choice. A memorial service will be held on Wednesday, December 20 at 2:00 p.m. at Thomson "In the Park" Funeral Home, 1291 McGillivray Boulevard. Interment and a celebration of Evelyn's life will be held at a later date. "I'm curious about everything, Even subjects that don't interest me." Alex Trebek THOMSON "IN THE PARK" 204-925-1120 Condolences may be sent to www.thomsoninthepark.com
Publish Date: Dec 19, 2017