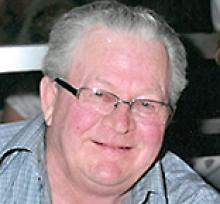 (SYL) SILVESTOR WOWCHUK 1941 - 2017 On December 18, 2017, Syl got into his truck that he loved so much and took one more ride, taking in the beautiful sites and scenery of Cowan. Unfortunately, this was his last ride. Syl was born on July 10, 1941 on the family farm in Cowan, where he grew up and spent his entire life. It was here that his love for farming flourished. He took great satisfaction in his ability to grow a successful crop and complete an early harvest. He was a self-taught welder and mechanic who could fix anything from a small motor to a diesel tractor. He often did repairs and welding for many of the neighbours. Syl attended Cowan West School but enjoyed farming, bush work and construction much more than school. At an early age he quit school and went to work for his cousin Peter doing construction in the summer and bush work in the winter. In 1965, he married Rosann Harapiak and took over the family farm which gave him great pleasure. Syl was an avid hunter in his younger years and hunting season was a special time with many friends gathering at the farm for the prehunt parties and then the big hunt. Syl was an active member of his community, serving on the Community Centre Board and Recreation Commission. When the Cowan Curling Rink was built he took great pride in his ice making abilities and curling skills. He also served as the president of the Ukrainian Catholic Cemetery for many years. In his retirement, Syl enjoyed his daily trips to the local coffee shop where he enjoyed companionship and local gossip. Syl and Rosann raised three children: Kim, Pam and Michael, and he was extremely proud of their many accomplishments. He welcomed each of their partners into the family as if they were his own children. But his greatest joy was the grandchildren who came to the family and made him a Gigi. Syl is survived by his wife, Rosann of 52 years; their children, Kimberlie (Barry) Campbell of Minitonas and their children, Jayvin and Rory, Pamela (James) Hadfield of Richmond Hill and their children, William and Amanda, and Michael (Tami) Wowchuk of Camrose and their children, Kelsey (Devin) Mohan and Jenna. He is also survived by his siblings, Vicky (Ernie) Kereluk, Rose Atamanchuk, Hope (Mel) Skulmoski, and Dave (Renate) Wowchuk; brothers-in-law, Steve (Netty) Harapiak, Walter (Maureen Harapiak, Leonard (Judy) Harapiak, and Harvey (Sandra) Harapiak; sisters-in-law, Pat (Dave) Holowachuk and Deanna Harapiak; as well as many nieces and nephews. He was predeceased by his parents, William and Jean (Plustwa) Wowchuk; his in-laws, Wasyl and Mary (Pilipchuk) Harapiak; brothers and sister-in-law, Bill Atamanchuk, Harry and Carole Harapiak, and John Harapiak. He will be greatly missed many and forever in our hearts. Should friends so desire, donations in Syl's memory may be made to the Heart & Stroke Foundation, 6 Donald Street, Winnipeg, Manitoba R3L 0K6. A memorial service will be held from St. Columba Roman Catholic Church in Swan River, Manitoba on Wednesday, December 27, 2017 at 10:30 a.m. with Father Roy Vazhaplankudiyil officiating. Interment will take place at Cowan Community Cemetery at a later date. Swan Valley Funeral Services 363 Kelsey Trail Swan River, Manitoba 204-734-5775 www.swanvalleyfuneralservices.com