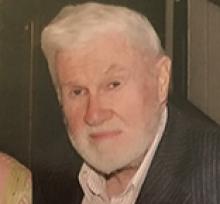 PROFESSOR ALLEN RICHARD KEAR Professor Allen Richard Kear, of Winnipeg, Manitoba, passed peacefully away at Beacon Hill Lodge, Winnipeg, on Friday, December 15, 2017. Predeceased by his wife, Celine Power Kear (September 9, 2017); his parents, Major William G. and Isabel Kear; his brother Doug Kear, and sisters Willa Weiser and Isabel Kear; sister-in-law, Kay Kear and brother-in-law, Berhard Weiser; parents-in-law, Neil and Rose Power of Newfoundland, brothers-in-law, Harold and Leonard Power, Norbert Lake and Fred Roche; and sister-in-law, Mary Manning Power. Leaving to mourn, his sister Anne Hathaway Kear, Toronto; his niece Carol Dunaway and grandniece, Niki Dunaway, Nanaimo, and cousin David Kear (Linda), Toronto; also his Newfoundland family, sisters-in-law, Maureen Roche, Mary Power (Amarjit Singh), Pauline Lake-Devine (Mike), and Bernadette Cocker (Bruce); brothers-in-law, Wilfrid Power (Rose), Rev. Peter Power, Dermot Power and Tom Power (Ernestine), and a large number of extended family members and friends in Winnipeg and Newfoundland. Allen was born in Kingston, Ontario in 1929 and moved with his family to Winnipeg at an early age. He came from a proud military family and graduated with a BA in 1953 from the Royal Military College (RMC) in Kingston, Ontario. He earned a BA (1954) and an MA (1966), both from Queen's University in Kingston. He remained loyal to both institutions, regularly attending RMC reunions and Queen's homecomings as he and his wife made their annual trip to and from Newfoundland. Allen was bilingual and studied at Laval University in Quebec City before he and his wife, Celine, moved to his hometown of Winnipeg in 1969, where he taught at the University of Manitoba until his retirement. Allen and Celine were both actively involved in the Heritage community and the St. Boniface Francophone community of Winnipeg. Allen was passionately interested in Canadian history, completing original research on Confederation and publishing articles in both French and English. He was a world traveller and a true academic, who never tired of visiting historical sites and monuments and expounding to students, family and friends about the historical and geographical grandeur of Canada. A sincere thank you to the staff of Beacon Hill Lodge, 5th floor, for their compassionate care during these past months. Cremation has taken place. A memorial service will be held at St. John's Anglican Cathedral, Winnipeg at a date to be announced. Donations in Allen's memory may be made to the Royal Military College or Queen's University in Kingston, Ontario. Condolences may be left at the Cropo Funeral Chapel website, cropo.com