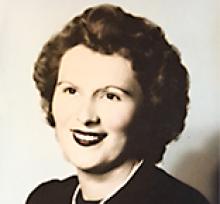 MARY ANNE HRYHORYSHEN 1923 - 2018 On Sunday, January 7, 2018, Mary Hryhoryshen, formerly of Swan River, Manitoba passed away at the Saul and Claribel Simkin Centre in Winnipeg, Manitoba. Mary is survived by her son Glenn; two grandchildren, Alexandria and Gregory, all of Winnipeg; one brother Leonard Boychuk (Judy) of Arden, Manitoba; and two sisters, Helen Dzkowski of Mississauga, Ontario, and Terry (Ron) Droil of Chilliwack, British Columbia, as well as many nieces and nephews. Mary was predeceased by her husband, Jack; her parents, Peter and Anne Boychuk; brothers, Hellar, William, Edward, and Ronald; and sisters, Patricia, Vicki, Jean, and Florence. Mary was born on the family farm in Sclater, Manitoba as the oldest child to Peter and Anne Boychuk on February 15, 1923. She attended school until the eighth grade while helping her mother raise her younger brothers and sisters. She married Jack Hryhoryshen on January 31, 1943. They were married for 66 years. Together they worked on the farm as well as in their restaurant in Pine River, Manitoba. They moved to Birch River, Manitoba in 1959 to begin a new chapter in their life. They operated a farm equipment dealership and a credit union. In 1979 they moved to Swan River where, with their son Glenn, they purchased another dealership. Mary was a hard, dedicated worker. She worked in many capacities, from washing equipment, delivery equipment, to selling parts. Mary was always an avid gardener and won numerous prizes for the "Best Kept Garden" and grounds in Birch River. Mary also loved curling, bowling, dancing, and travelling. Mary always enjoyed visiting her family and especially her grandchildren in her later years. We will miss her dearly and she will always be in our hearts. Evening prayers were held at the Ukrainian Orthodox Church of Holy Ascension in Swan River, Manitoba at 7:00 p.m. on Thursday, January 11, 2018. Funeral services were held Friday, January 12, 2018 at 10:00 a.m. with Reverend Father Michael Faryna officiating, assisted by Cantor Zennovia Duch. Following the service, Mary was laid to rest in the family plot at the Birchwood Cemetery in Swan River, Manitoba. Should friends so desire, memorial donations in Mary's name can be made to the Heart & Stroke Foundation of Manitoba. Swan Valley Funeral Services 363 Kelsey Trail Swan River Manitoba 204-734-5775 www.swanvalleyfuneralservices.com