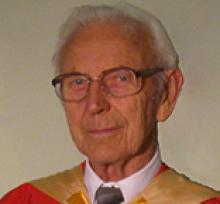 DR. EDMUND KUFFEL It is with heartfelt sadness we announce the passing of Dr. Edmund Kuffel on the morning of January 12, 2018. Edmund passed away peacefully at Concordia hospital at age 93, surrounded by loving family and friends. Predeceased by his wife of 64 years Alicja; his daughter Bernadette; his granddaughter Katrina; his parents, Franciszek and Marta (nee Glowska). He is survived in Canada by his children, Anna (Waldemar), John (Alice), Rick (Susan) and Peter (Theresa); his nine grandchildren; his four great-grandchildren; his nephew Marek (Elzbieta) their two children; his brother-in-law Stan (Danka) their son (Andrew); as well as siblings and extended family in Poland. Edmund was born in Przysiersk, Poland, in 1924. During World War II he took part in the Italian campaign as a soldier of the Second Polish Army Corps in the West. To avoid persecution in post-war Poland Edmund remained in the West - initially in Italy, then Ireland, England, and eventually Canada. Edmund loved to learn and was passionate about teaching. His education included a B.Sc. (honors) degree (1953), M.Sc. degree (1954) and PhD. degree (1959), all from University College, in Dublin, Ireland. He would later earn a Dr. of Science degree from the University of Manchester (1967). Edmund was an academic at heart and spent much of his career as an engineering professor, head of department and finally the Dean of Engineering at the University of Manitoba (1979 to 1989). Throughout his long and successful career Edmund was well liked and respected by his colleagues, the students he taught and the engineering community as a whole. During his studies in Dublin, Edmund met the love of his life and future wife Alicja. In 1968, together with his family, Edmund immigrated to Canada and settled in Winnipeg where he continued his academic career as a professor of engineering at the University of Manitoba. While living in Winnipeg, Edmund and Alicja were passionately involved in the Polish community and were instrumental in sponsoring many new families to Canada. They were also actively involved in the 1984 visit of Pope John Paul II to Winnipeg which eventually led to a private audience at the Vatican. In 2009 Edmund was honored with the distinction of Doktor Honoris Causa from the Poznan Polytechnic University in recognition of his contribution to High Voltage Engineering and his life-long support of the Polish Academic community. The family would like to express their thanks to Dr. T. Laycock, Dr. F. Anashara, and the Emergency department staff at Concordia hospital, also Dr. P. Kuegle and the staff of N2E for their compassion and kindness. Special thanks to our dear family friend Hannah and to Edmund's Healthcare Aid Lisa, who acted as primary care givers in his final years. Prayers for Edmund will be held on Wednesday, January 17, 2018 at 7:00 p.m. at Cropo Funeral Chapel. Edmund will be remembered at a Mass to be held at St. Joseph the Worker Catholic Church, 505 Brewster St. at 11:00 a.m. on Friday, January 19, 2018. Interment will follow at Holy Ghost Cemetery. In lieu of flowers, the family requests that donations be made to the Concordia Hospital Foundation or a charity of your choice.
Publish Date: Jan 16, 2018