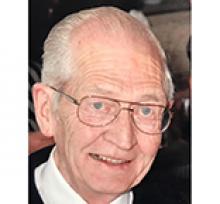 DONALD GEORGE VINCENT 1936 - 2018 It is with great sadness the family announces the passing of Donald George Vincent on January 11, 2018 in Russell, MB. Don is survived by wife Kay; Angela and Warren Morrisseau, Kent and Kirsten Vincent, grandchildren Bryce and Reagan, sister Lorraine and Sieg Schewe, sister-in-law Linda Vincent, and numerous nieces and nephews. Don was predeceased by son Kirk Vincent, mom Ada and Clarence Vincent, and brother Brian Vincent. Don spent most of his younger years in Boissevain, Winnipeg and Killarney, MB where he attended school and learned his baking trade at Barkwell Bakery. After marrying Kay Stephens, both Don and Kay purchased Parkland Bakery in Roblin, MB in 1964. While in Roblin, all three children - Kirk, Angela and Kent were born. Don operated Parkland Bakery until 1978. In 1979, Don and Kay purchased Banner Bakery in Russell and moved the family to Russell. Don operated Banner Bakery until only a few years ago, October 2011, when he retired. Don worked long, hard hours and truly enjoyed baking fresh bread and buns for his customers every day. When Don wasn't baking for the past 60 years, he enjoyed a few vacations with family and going for drives in his Lincolns and Cadillacs. Don enjoyed reading the newspaper, watching the Toronto Blue Jays, Winnipeg Jets, and all curling events. In lieu of flowers, kindly consider a donation to Living Legacy Community Foundation. Funeral service was held Wednesday, January 17, 2018 at George P. Buleziuk Centre, Russell at 1:00 p.m. Interment followed in Killarney Cemetery, Killarney. Wheatland Funeral Service www.wheatlandfs.com - 204-523-7791