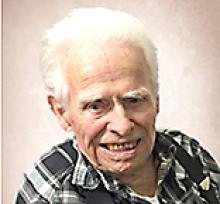 NORBERT BOULET January 24, 1919 - January 17, 2018 Norbert "Bert" Boulet of Killarney, Manitoba, passed away on Wednesday, January 17, 2018 at the Bayside Personal Care Home in Killarney, Manitoba, at the age of 98 years. Norbert was born in Dunrea, Manitoba to parents, Alexandre and Virginie Boulet, one of 12 children. Norbert was a veteran of the Second World War, where he served as a Lieutenant Air Gunner. He sailed overseas on the Queen Elizabeth and sailed home on the Queen Mary. During his later years, he told many stories of those days shared with his Squadron 420 crew members (Snowy Owls). Norbert met his wife, Gladys Viola Valentine, while they were serving in the Royal Canadian Air Force. They were married for 55 years and had four children; eight grandchildren and 14 great-grandchildren. Norbert loved the wide open prairies, a drive in the country and spending time outdoors in the garden. He also enjoyed socializing, spending time with family and friends, reading, sports, puzzles, and a competitive game of cribbage. He is preceded in death by his wife Gladys in 2000; eldest son Murray in 2011; his parents and siblings, with the exception of one brother. He is survived by his daughter-in-law Vi; son Gary and daughter-in-law Cheryl; daughter Lorraine and partner Claude; daughter Darlene; brother Emile, eight grandchildren; 14 great-grandchildren and many nieces and nephews. A private family service will be held in Brandon, Manitoba at a later date. Memorial donations may be made with the Heart & Stroke Foundation, Unit 3-2430 Victoria Avenue, Brandon, MB, R7B 0M5 or at www.heartandstroke.ca. Norbert was loved by all, and will be dearly missed by his family and friends. He touched many hearts in his 98 (one week shy of 99) years, and lived a very good life. May he Rest in Peace and Love. Arrangements are in care of Brockie Donovan Funeral & Cremation Services, Brandon, (204) 727-0694 Messages of condolence may be placed at: www.brockiedonovan.com.