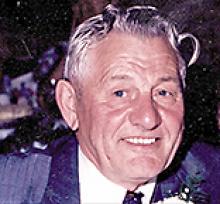 OTTO KLASSEN April 7, 1927 - January 17, 2018 It is with great sadness that the family announces the passing of their beloved father, grandfather and great grandfather on Wednesday, January 17, 2018. Otto passed away peacefully, with his loving children at his side. Otto will be fondly remembered and greatly missed by his children Irmgard (George), Otto, George (Betty), Anne-Marie (Frank) and Charlotte (Rick); grandchildren, Ken (Heidi), Derek (Jeanne), Keith (Charlene), Karina (Doug), Deanna (Chris), Marie (Chris), Michael (Misty), Nikita, Christopher, Jonathan, Ian (Beverly), Daniel (Rachel), Jeanette (Paul), Melanie, Kristy, Mitchell and Austin; great-grandchildren Tatum, Tyrone, Kaila, Neil, Otto, Jonas, Jaymi, Isaak, Katie, Mia, Gracie, Sofia, Jack, Seth, Isaiah, Shekinah, Gabrielle, Josiah, Jacob, Jaden, Bryce and Tait. He is also survived by his sister-in-law, Agathe. Otto was predeceased by his wife Kaethe; daughter-in-law Marlies; parents Bernhard and Katharina; brothers Bernhard and Jakob; and sisters Anni and Kaethe. Otto was born on April 7, 1927 in Schoeneberg, Ukraine. He was separated from his family during the war and in 1945 he made a daring and courageous 800 km trek back into the Russian occupied zone to find his family and escape the land of tyranny together. In 1947, the family moved to Paraguay and settled in the colony, Volendam. It was here that he met and fell in love with his wife Kaethe. They were married on April 30, 1949 and had two children, Otto Jr. and Irmgard. In October 1955, Otto, Kaethe and their two young children moved to Winnipeg. After hard work and dedication, they established a business O. Klassen Masonary Ltd. They also had three more children, George, Anne-Marie and Charlotte. Otto was a wonderful husband and father. Once his business was established he began his film making career. He produced 84 films, over 50 of them are documentaries that have been used in schools, universities and churches to create an awareness of the history of people who were persecuted for their Mennonite faith. The University of Winnipeg honoured Otto with an Honorary Degree of Doctor of Letters on October 21, 2007. He wrote and published two autobiographies, "I Remember" and "Erinnerungen Aus Meinem Leben". In 1973 the Falcon Lake cottage was purchased and is where many wonderful family memories were made. Otto had a strong faith and trust in God. His love and support will be greatly missed. We would like to thank the staff at River Ridge Retirement Residence. He truly enjoyed his time there. Funeral service will be held on Tuesday, January 23, 2018; 11:00 a.m. at Douglas Mennonite Church, 1517 Rothesay St. The viewing will be prior to the service. In lieu of flowers, donations may be made to Mennonite Central Committee, 134 Plaza Dr., Winnipeg, MB R3T 5K9. Numbers 6:24-26 "The Lord bless you and keep you; the Lord make his face shine on you and be gracious to you; the Lord turn his face toward you and give you peace."