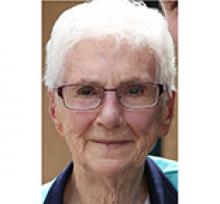 ALICE MARY WILSON Peacefully on January 16, 2018, at the age of 93, Alice passed away, with her family by her side, at the Rock Lake Personal Care Home in Pilot Mound, Manitoba. She is survived by her dearest son Lindsey (Kathryn), cherished granddaughters Kelsey McCuspey (Kirk), Hillary Anderson (Rory), precious great-grandchildren Colton and Cali McCuspey, and dear friend and side-kick, Cheryl McKitrick. Alice was one of three siblings born to Mary Ann and James Hiddleston of Crystal City, Manitoba. She was predeceased by her parents, her sister Helen Howard, brother Jack, and her beloved husband Norman in 2015. Following graduation from Victoria Hospital School of Nursing in 1947, Alice worked in Deloraine, MB until returning to Crystal City in 1951 when she married Norman. Crystal City remained their life long home. She continued her nursing career at Crystal City Hospital until retirement in 1989. Alice was delighted with the birth of her two granddaughters and her tremendous affection for them was always in evidence. The arrival of two great-grandchildren further added to her joy. She was generous, courageous and kind, and never forgot how important people were in this life. "Nana" as she affectionately became known, will always remain a symbol of graciousness and strength and will be deeply missed by her family. Our heartfelt thanks to the staff of Rock Lake Personal Care Home who have been our extended family for four years. Your care of Alice, your compassion, your humanity and your affection for her will never be forgotten. Special thanks to Cheryl McKitrick, more a sister than just a friend. Memorial service will be held at the Crystal City United Church on Saturday, January 27, 2018 at 1:00 p.m. Flowers gratefully declined. Donations to the Rock Lake Health District Foundation, 115 Brown Street, Pilot Mound, MB R0G 1P0, would be appreciated. Messages of condolence may be made online at www.wheatlandfs.com. Wheatland Funereal Service (204) 825-2848 - www.wheatlandfs.com