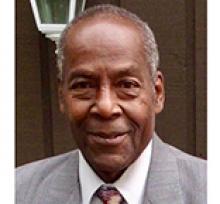 CLAYDEAN VIRGIL LEWIS Peacefully on Sunday, January 21, 2018, at his residence, Claydean Virgil Lewis passed away at the age of 88 years. Claydean was born on September 20, 1929 in Memphis, Tennessee. He was predeceased by his parents: Arthur and Freda Lewis, and his five sisters and four brothers. His legacy will live on through his many nieces and nephews. In the summer of 1948, Claydean arrived in Winnipeg, he worked for the C.P.R. A year later he went back to Morehouse University, finishing his B.A. in Administrations and Psychology. Returning to Winnipeg for a short time to work as a C.P.R. Porter. In 1951, he returned to the States at which time he was drafted into the U.S. Army. He served in the Korean War (1951 to 1953), as a Tank Commander and served with Airbourne Regiment. Once he was discharged he returned to Winnipeg and worked for the C.P.R., again. He attended the University of Michigan in the mid 1950s obtaining his BSW and MSW in 1960. Upon his return to Winnipeg, he worked at the Rehab Hospital as a Supervisor of Social Services. He also worked with other Health Organizations. He was the first Social Worker to deliver Meals on Wheels. He also had another job at that time, which he really enjoyed - cab driver. Claydean met and became friends with the late John Rodgers in 1971, it was that partnership that founded "Main Street Project" (MSP) in 1972. Claydean was the Assistant Director of MSP till he retired in 2002. He was also an Arbitrator for Corrections Canada. Claydean was an active board member for many organizations and projects throughout his life. In 1977, Jack's Place (Hotel) opened, Claydean remained dedicated and committed until it closed in 1999. He had been involved with other organizations such as Alcohol Recovery Inc., Community Income Tax Services, Pathways, and other boards in the Main Street area. He received many accolades throughout his career such as Inner City Community Award, John Rodger Community Service Award, WPS/for Partnership and those less fortunate in the Community, and Queen Elizabeth II Golden Jubilee Medal. Throughout Claydean's life he has been a mentor and friend to so many people. Claydean's true inspiration was that he knew and respected his friendship with Martin Luther King Jr. Claydean shared his last 18 years with his best friend and partner Colleen Vanasse. Claydean's wish was to pass away at home and so, with the care and love of Colleen and her family, that wish was fulfilled. Claydean loved: Sunday family dinners, sitting outside watching Colleen putter, when he was still driving he would take Tequila to the dog park, driving the garden tractor at Ross and Sharon's, inside and outside Christmas decorations, watching TV, music of BB King, cooking, swimming, cycling, playing squash, playing pool, going for drives, sitting outside visiting with the neighbours, hearing from long time staff and friends he made through the years, reading with and sharing his life experiences with Colleen's children and granddaughter Hannah, and his special bond with his nephew "Raymond". He will be remembered and loved by Colleen and her children, Amanda and granddaughter Hannah, Christopher and Bernadette/Brett and grandson Cooper, his granddogs Tequila and Dolly; and his sister-in-law Sharon Fotty-Smith. Thanks to the W.R.H.A. Home Care Staff, Family Physician - Dr. Ian McGregor, Palliative Care staff, and Dr. Bruce Marten. Special Thanks to Meyer's Pharmacy for many years of friendship and professionalism, your guidance and support was really appreciated. Respecting Claydean's wishes there will not be a formal service. In lieu of flowers, donations can be made in the memory of Claydean to Main Street Project, 75 Martha Street, Winnipeg, Manitoba R3B 1A4. MacKenzie Funeral Home Stonewall 204-467-2525 info@mackenziefh.com