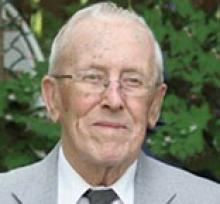 JOHN (JACK) ALAN LAMB January 24, 1931 - January 28, 2018 After a lengthy and difficult illness, we announce the peaceful passing of John (Jack) Alan Lamb, loving husband, father, grandpa, and uncle just four days after his 87th birthday at the Pinawa Hospital on Sunday, January 28, 2018. Jack is survived by his wife of 60 years of marriage, Joyce; children, Jason (Carole) - Jamie (Dakota), Kevin, Scott, and Julie (Cory) - Ryley, Hannah and Ethan; sister Mary in England; many nieces and nephews across Canada and their beloved dog and best companion, Josie - who has been patiently waiting for him to come home. He was predeceased by his parents at a young age; sisters, Bette, Joan, Frances; brother Tom and daughter Jill Allison (1974). Born in Morecambe, Lancaster, England to Annie and Norman Lamb on January 24, 1931, the second youngest of six siblings. Jack attended electrical engineer apprenticeship with JAS. Williamson and Son Ltd., 1948 to 1952 when he was called up and served his term as a National Service soldier in the Suez Crisis in Egypt. Jack returned from the war just in time to see his mother pass, then immigrated to Canada in 1955 at the age of 24 following his older siblings, Joan and Bette and then Tom. When he arrived in Canada he went to Winnipeg Hydro and got a job that same day working in various departments in Winnipeg. Jack lived across the street from his future sweetheart, meeting Joyce in 1956 and they were married in 1958. In the 1960s, he was an active member of the St. Boniface Kinsman Club. Jack was transferred to the Power plant in Pointe du Bois in 1972 as an Electrical Supervisor, retiring as Superintendent in 1990 after 35 years of service. He volunteered many hours of his time to the Lac du Bonnet Health Centre and was chairman of the board for 18 years. Camping at Detroit Lakes, fishing, boating, and golf were just a few of Jack's favourite things, spending many days up the river at Chulka's cabin, or at big beach making lifelong friendships. After he retired he also spent countless hours with the CNIB in Winnipeg dictating books for the visually impaired. In 1997 Jack and Joyce moved to East Selkirk, to build their dream home with a pool for the grandkids, becoming active in the Gordon Howard Society and was elected chairman for four years. He enjoyed playing the Wii, teaching many there Wii bowling and took great pleasure in practicing up so he could beat the grandkids on the weekends. While in Selkirk, they joined the Red River Squares dance club, where they made many friendships, had many laughs, always having a joke to tell. They moved to Pinawa in 2014 to be closer to family. Music was near and dear to Jack's heart, having taught himself to play a variety of instruments as an adult including the trumpet, coronet, and flute. He enjoyed playing trumpet for many Remembrance Services in Lac du Bonnet. He was never afraid of a challenge, had a strong work ethic and expected the same from others. Jack loved roast beef with Yorkshire puddings on Sundays, chocolates and trifle on any occasion. One of his greatest joys was watching his grandkids playing sports. He enjoyed memorizing the names/numbers of their teammates, socializing with the parents/grandparents (eating cookies) and attended as many games as he could until his illness prevented him. A celebration of Jack's life will be announced at a later date. Our family would like to thank the staff at Seven Oaks Hospital, along with Dr. Garg and staff at Pinawa Hospital for their compassionate care. In lieu of flowers, donations may be sent to the Pinawa Hospital CancerCare, the Pinawa Golf Course in memory of the many hours Jack spent golfing with friends, or to the Winnipeg Humane Society for the love of his dog. Wojcik's Funeral Chapels & Crematorium (Serving Beausejour) 204.268.2263 or 1.866.424.6271 www.wojciksfuneralchapel.com