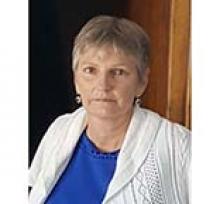 MARY GIESBRECHT (nee MARTENS) 1964 2018 It is with deep sadness we announce the death of our dear wife, mother and grandmother, Mary Giesbrecht. She died at Boundary Trails Health Centre on Tuesday, January 30, 2018 at the age of 54. Mary was diagnosed with Stage 4 colon cancer in September 2017. She waged a very brave battle however, her condition deteriorated as the disease progressed. Mary will be dearly missed by her husband Ken and her children and grandchildren, Stacy Schroeder (Rick; Ethan, Layla), Lisa Krahn (Matt; Jase, Grayson), Harold Rezansoff (Alex; Kyah, Kezzia, Cressida, Kodah), Keith Giesbrecht, Donaven Giesbrecht (Mary; Kyle, Delaney, Loralei), Mike Giesbrecht (Jenn), Kris Giesbrecht (Danielle). Mary is also survived by her parents, Isaac and Edith Martens; five sisters; three brothers; five sisters-in-law; one brother-in-law and their families. Mary was predeceased by her father-in-law and mother-in-law, Peter and Evelyn Giesbrecht and sister-in-law Linda Giesbrecht. Mary was born and raised in the Winkler area. She was baptized upon the confession of her faith and this faith sustained her throughout her illness. Mary and Ken were married June 26, 1993 and farmed in the Grimsby district south of Plum Coulee. Mary enjoyed the farm; she provided TLC to many of the animals and pitched in to help wherever necessary. Mary also did part-time bookkeeping and secretarial work outside of the farm. She had a green thumb when it came to gardening, especially the beautiful gladiolas she grew. Her hobbies included cross-stitching, reading and puzzling. A memorial service to honour Mary's life will be held at 2:00 p.m. on Saturday, February 3, 2018 at Winkler Sommerfeld Mennonite Church, 189 2nd St. with interment prior at 12:00 p.m. at the Rudnerweide Cemetery. The family thanks everyone for the many prayers and support offered throughout Mary's illness and during this very difficult time of loss. The family also thanks the nurses and doctors at Boundary Trails Health Centre for their care and compassion. Donations may be made in Mary's memory to the BTHC Foundation, designated to CancerCare, Box 2000 Winkler, MB R6W 1H8. "Oh give thanks unto the Lord; For He is good; For His mercy endureth forever." 1 Chronicles 16:34 Wiebe Funeral Home, Winkler In care of arrangements wiebefuneralhomes.com