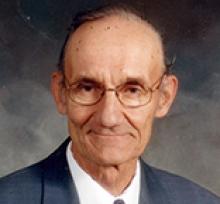 KENNETH STEWART EDIE Peacefully on January 31, 2018 at the age of 82 years after a lengthy illness, Kenneth Stewart Edie passed away in Oakbank, Manitoba. Ken is lovingly remembered by his wife Susan of 60 years; his children Debbie (Elwood), David (Lisa), Earle (Cheryl); grandchildren Brandee (Randy), Devon (Breanna), Alana, Elijah, Maya, Chloe; great-grandson Ashton; sister Lois Allison (Lyall), sister-in-law Eunice Edie, brother-in-law Stan Godfrey (Arloa), sister-in-law Lois Carpenter (Leo) and many nieces and nephews and great nieces and nephews. He was predeceased by his parents Bruce and Florence, his siblings Norman (Lois), Arnold (Helen), Glen, Verna Bailey (Allan) and grandson baby Noah. Ken was born on April 25, 1935 and lived his entire life in the Dugald area. In 1955, he graduated with a Diploma in Agriculture from the University of Manitoba and many lifelong friendships with a great group of "Aggies". On August 3, 1957 Ken married the love of his life Susan. In 1966, Ken was awarded a six month Nuffield Agricultural Scholarship to study agricultural marketing systems in Great Britain. He and his brothers had a dairy farm until 1975, then grain and oilseeds only. At this time, Ken found his passion in a new crop called rapeseed. He was involved in organizing the Manitoba Rapeseed Growers Association later to become the Manitoba Canola Growers. He was honoured by them in 2013 with the Canola Award of Excellence. He went on to work with the Canola Council of Canada, serving on the board in various capacities, eventually becoming board chairman and ultimately receiving a life membership in the Canola Council of Canada. As a result of Ken's role in building the canola industry in Canada, he received a Queen Elizabeth II Diamond Jubilee Medal in 2012. In 1977, he served as interim chairman of the board of Western Grains Research Committee to organize a vote on a grains research check off which was successful. He was also a District director and later Vice President of Manitoba Pool Elevators, the first Public Governor of the Winnipeg Commodity Exchange, and a member of the executive committee of Canadian Centre for Occupational Health and Safety. Ken was in the Naval Reserves when he was a young man and spent three months deployed on the Pacific sailing to and from Japan. This was just the start of his love of travel. Over his lifetime, he visited all ten Canadian provinces, many US destinations and five continents for work and pleasure. He enjoyed time spent with his Prairie Voices Toastmaster friends and made many speeches on historical topics. Ken gave back to his community in many ways including umpiring youth baseball and reffing minor hockey. In retirement, he returned to curling and helped instruct junior curlers. He continued skating and downhill skiing for many years. He greatly enjoyed spending time with his family - first his children and then his grandchildren - following their sporting endeavours, encouraging their excellence in their studies and seeing them grow into fine young men and women with a terrific work ethic. We would like to thank Kin Place Personal Care Home for the compassionate care Ken received over the last three years. A celebration of Ken's life will be held Tuesday, February 6 at 11:00 a.m. at Oakbank Baptist Church. There will be a private family interment at Sunnyside Cemetery prior to the service. Ken was passionate about everyone having food to eat. In lieu of flowers, please make donations to Canadian Food Grains Bank, Box 767, Winnipeg, R3C 2L4; Springfield Food Bank or a charity of your choice. seasonsfunerals.ca