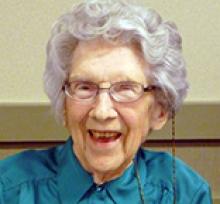 LORNA LESLIE ELLISON (nee DUXBURY) They must have called one hell of a party in heaven for Lorna to decide to leave us on Sunday, February 4, 2018. Parties, big and small, family dinners at Wendy's, quiet conversations with family or friends, the anticipation of a new great-grandchild - this was the stuff that brought happiness to the last quarter century of Lorna's 103-year journey. She was not the party sparkplug but always a quiet contributor, if not by word then by lack thereof. Was it a gift or the result of years of classroom study that gave her instant empathy with a precocious great-grandchild or understated guidance for a 70 plus year old infant? On October 12, 1914 Lorna was born in Elkhorn, Manitoba and grew up on her parents, Thomas and Ethel Duxbury's, farm nearby. Grade I through VIII were spent at a one room schoolhouse accessed by horse cart and IX thru XI at Elkhorn High School. She was fortunate to be able to attend Virden Collegiate for Grade XII and from there Winnipeg Normal School which along with University of Manitoba summer courses allowed the obtaining of her Permanent Teaching Certificate. Lorna's first teaching job was at a one room brick schoolhouse just west of Elkhorn where she taught the first eight grades to 42 pupils. Her second teaching job saw her move from the prairies to the bush of Bird River, a settlement in north east Manitoba with access by bush plane or boat. Her third move was to Winnipeg where she married William (Bill) A. Ellison on May 21, 1938. Bill Ellison was the Principal of the seven teacher Grandin School and a Justice of the Peace in the Winnipeg community of Fort Garry. The newly married couple moved into a home on the banks of the Red River near the school. Rumor has it that a tunnel discovered in the basement of the home once gave access to a speakeasy on Pembina Highway. Lorna gave birth to the couple's three children in this house and once Wendy, the youngest, started school in the fall of 1949, Lorna returned to her teaching career. The record Red River Flood in the spring of 1950 forced the family to seek shelter with their good friends, the Cairns family in Oak Lake, Manitoba. In 1951 the family moved to Lockport, Manitoba where Bill became Principal of the three classroom Lockport School. He taught Grades VI through VIII while Lorna taught III through V. Bill died suddenly on January 19, 1952 and the family moved to Winnipeg in the summer of 1952. Lorna completed a 33-year teaching career at Winnipeg Elementary schools (Lord Roberts, LaVerendrye and Greenway). Retirement, the final 38-year stage of Lorna's life included travel around Canada and to the Arctic, USA, South Africa, UK and Australia. To keep sharp, she attended University of Winnipeg Senior Classes, the Winnipeg Symphony and Pops, played Bridge and was a superlative Scrabble master. St. James Anglican Church (ACW) activities and numerous charities were other interests. Her greatest contribution was, however, as a friend, confident, guide and supporter to her friends and family. Lorna is survived by her three children: daughter Moira (Donald) Drybrough and four grandchildren Catherine (Mark) Graham, Cynthia (Dave) Jamieson, Donald (Brenda) Drybrough and Christina; son Walter Thomas (Ellen Mary Mills) and three grandchildren Walter (Rebecca) Mark, Susan (Harvey) Sefton and Cherie (Jim) Cathcart, and daughter Wendy (Douglas) Scott and three grandchildren Nancy Scott (Shane Hopkie), Diane Scott (Pat Lonsdale) and Sharon Scott (Steve Lougheed). (Lorna was especially appreciative of the Scott's family care and commitment to her well being in the last 15 years). She is also survived by 21 great-grandchildren, special friends Wendy Ellison and Enid Lorna Dorward and daughter Melanie and Helen de Pava. She was predeceased by her husband William Alexander Ellison, brothers Lloyd George, William Bruce (Anne) and Flight Lieutenant Thomas (R.C.A.F.) who was shot down over Belgium, as well as by lifelong friends Janet Duxbury and Phillis Cairns. Lorna's funeral service will be held on Thursday, February 15, 2018 at 2:00 p.m. in St. James Anglican Church, 195 Collegiate Street, Winnipeg, MB. Our family is very grateful for the wonderful care Mom received at Golden West Centennial Lodge. If desired, donations in Lorna's name may be made to St. James Anglican Church, 195 Collegiate Street, Winnipeg, MB R3J 1T9 or The Salvation Army, Golden West Centennial Lodge, 811 School Road, Winnipeg, MB R2Y 0S8. Wojcik's Funeral Chapels & Crematoriums, Winnipeg, 2157 Portage Avenue, 204.897.4665 www.wojciksfuneralchapel.com