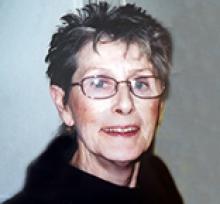 VERONICA (VERA) VIGFUSSON It is with deep sadness that we announce the passing of our mom Veronica "Vera" Vigfusson on Wednesday, February 7, 2018 at the E. M. Crowe Memorial Hospital in Eriksdale, MB. She was predeceased by her husband Kari Vigfusson, daughter Janet Amanda, and grandson Alexander Alan. She is survived by her daughters Jennifer (Kevin), Sarah (Thor) and Gillian (Bruce); grandchildren Edward, Peter (Stefanie), Connor, Zoe (Brady), Thomas, James, Olivia, Amelia, Isabella, and great-grandson Luke. Vera was born in Coolatore, Westmeath, Ireland on October 16, 1941. She was the third born of 11 brothers and sisters. As a young Nanny she lived in Kuwait and met her first husband Geoffrey, a company doctor for a Middle East oil company. They married in London on September 10, 1960 and began their family life in England where her first two daughters Janet and Jennifer were born. The young family immigrated to Canada and settled in Carnduff, Saskatchewan and daughters Sarah and Gillian soon followed. In 1970, she moved to Moose Jaw and it was there that she met Kari Vigfusson, a member of the Royal Canadian Air Force and they began their life together. After Kari's retirement in 1988, they returned to Vic's hometown of Lundar. Vera was a generous and kind-hearted lady, a devoted mother, nana, wife and friend. Cremation has taken place and a memorial service will be held at 2:00 p.m. on Monday, February 12, 2018 at the Lundar Lutheran Church with Pastor Terry Throndson officiating. Interment will be held in the Otto Churchyard Cemetery. In lieu of flowers, donations may be made in Vera's memory to the E. M. Crowe Memorial Hospital Guild, c/o Irene Sigurdson, Box 474, Eriksdale, MB R0C 0W0. We wish to thank the doctors, nurses and staff of the E. M. Crowe Memorial Hospital for the wonderful care of our mom and our family, and to the amazing people in the community who have supported and cared for her over the years with such great respect and compassion. Arrangements by ARNASON FUNERAL HOME Ashern - Lundar 1-204-768-2072 1-866-323-3593