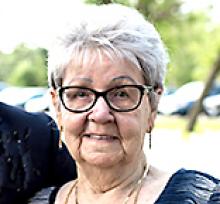 OLIVE SADIE (MILNE) TEMPLETON After living an incredible life of more than 94 years of dignity, grace, strength, and tremendous love for her family, our beloved mom, grandmother, great-grandmother, aunt and friend, Olive Sadie (Milne) Templeton, passed away peacefully on January 28, 2018 surrounded by her family. She was predeceased by her husband of 54 years, Bob (Robert Russell) Templeton, her son Bruce Templeton, her great-nephews, Murray Shearer and Shane Ross Robinson, her nephew Allister Wilson and all her siblings; Elsie and Ben Wilson, Margaret and Hugh Templeton, Gertie and Tom Templeton, Florence and Allan Brown, Jim and Margaret Templeton, and Catherine and Cam Ross. She leaves behind a wonderful legacy to carry on her spirit in her daughter Gwenda Templeton and grandchildren, Bobbi Milberg (Don), Jamie Mariani (Marc), Kelleigh Coombs (Matt) and Doug Coombs (Robyn), great-grandchildren, Symon and Olivia Milberg, Alice, Emma and Max Mariani, Taylor, Madison, James and Jacklynn Wuirch-Coombs, Ella and Zavery Wahoski and Anna Coombs. Olive was born September 19,1923, and was raised in Newdale, MB; the fourth daughter to James and Sarah Milne. She graduated from Newdale School and Winnipeg Normal School (1942-1943). She had great affection for the students she taught at Cameron and Basswood Schools (1943-1949) and stayed in touch with many for the rest of her life. Olive took pride in her second occupation as the book-keeper for Gulf Oil Company in Basswood (1966-1978). On July 26, 1947 Olive married Bob; the third Milne sister to marry a Templeton brother and they started their life together on their farm in Basswood, MB. Bruce Milne was born in 1951 and Gwenda Roberta was born in 1953. Nelson Shewfelt became part of their family in 1959. They retired from farming in 1985 and moved to Minnedosa, MB in 1995. Bob passed away in September, 2001 and in May, 2002 Olive moved to Brandon to be closer to her sisters. She lived in the Westman Lions Manor November, 2016. Together, Olive and Bob worked hard, volunteered their time and handled life's challenges in stride. They were mentors and a constant source of support for their family. They danced, curled, bowled, travelled, attended ball games and hockey games, enjoyed their family, neighbours, friends and everyone they met along their life's journey. Olive was a strong, charismatic and kind individual. She lived life to the fullest, sharing wonderful times with her family and friends, loving them all unconditionally. Mom's passing has left a void in our lives that will never be filled but we are so thankful to have had such a caring, generous and wonderful woman in our lives. We will miss her every day. A Celebration of Life was held February 17, 2018 at Basswood Community Hall with interment following in the Basswood Cemetery. In lieu of flowers or cards, if you wish, donations may be made to Minnedosa Regional Events Centre in Memory of Olive and Bob Templeton, Box 1425 Minnedosa, MB R0J 1E0. Minnedosa Funeral Service in care of arrangements. Messages of condolence may be placed online at www.minnedosafs.ca